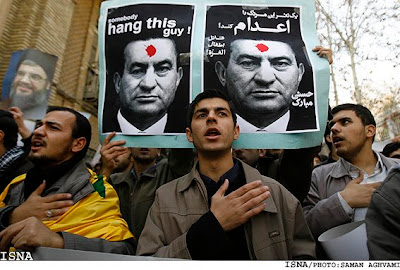 If there's a big blue meanie in this scenario, it's Mubarak, who for two years running has made Parade magazine's "World's Worst Dictators" list. Mubarak has stayed in power in Egypt for over a quarter century through military rule, torture, emergency law, rigged elections, and keeping his nose planted in Israel's tohkes (and, by extension, America's as well).

But if he says the Iranians are up to no good, the no goodniks, that's good enough for us, because we've had years of Dick Cheney and his Iran Directorate telling us how bad Iran is.

Though they have yet to prove any of their allegations, the Cheney Gang has most of the world believing the Iranians are responsible for arming militants in Iraq. The world, mostly because of the mainstream media's indolence, is largely unconscious that the party most responsible for handing out free guns to Iraqi yahooligans is General David Petraeus. Nor is the world especially cognizant that the reductions in violence that Petraeus so merrily takes credit for are actually the result of Iran brokering a peace agreement between Shiite factions headed by cleric Muqtada al Sadr and Prime Minister Nuri al Maliki.

The preponderance of the world believes Iran is pursuing a nuclear weapons program, despite decisive statements by U.S. intelligence agencies that they abandoned their program in fall of 2003. The Russians didn't begin building Iran's first reactor until fall of 2002, so whatever nuclear program Iran had must have been the kind of thing a bunch of Revolutionary Guard colonels drew on the back of a napkin on a rainy afternoon Fort Farsi Officers' Club. That U.S. intelligence granted the existence of an Iranian nuclear weapons program at all was almost certainly a result of pressure from Lord Cheney's leg breakers.

The world perceives that Iran instigated Israel's 2006 invasion of Lebanon because of allegations like the one made by the Israeli cabinet that Lebanon had become infested with "Iranian-sponsored terrorist enclaves of murder." This perception endures despite the discoverable big block facts in the Lebanon conflict: the Israelis were the ones who blew the bejesus out of southern Lebanon, and the Persian Iranians were the ones who came in afterward and offer aid to injured and homeless Arabs despite attempts by the nice guy Arabs in Turkey and Saudi to stop them.

And now the Persian Shiite Iranians are the ones trying to help Sunni Palestinian Arabs in Gaza who the Israelis are starving, and it's Egyptian Sunni Arab Mubarak who's assisting Israel and who's trying to paint Iran as the bad guy.

Welcome to your Brave New World Order, fellow citizens. Black is white, up is down, scumbags rule, humanitarian works are acts of aggression and so say the round heeled news media.

And everybody knows, of course, that the Iranians want to get their mitts on nuclear weapons so they can blow Israel off the map because that's what their president Mahmoud Ahmadinejad said. Well, actually, nobody knows that because that's not what Ahmadinejad said. He was actually quoting the late Ayatollah Ruhollah Khomeini, and according to Professor Juan Cole and other Farsi speaking commentators, Ahmadinejad's exact words were "The Imam said that this regime occupying Jerusalem must vanish from the page of time."

Iran doesn't have nuclear weapons or a program to make any. It may or may not have ballistic missiles that will reach Israel, but without nuclear warheads, ballistic missiles are little more than multi-million dollar popguns. Iran's army can't project power more than ten miles beyond its borders, Iran's air force can't fly to the other side of the Persian Gulf, and its bathtub navy, while an effective coastal and choke point denial force, couldn't go toe-to-to with the Somali pirates because it would sink of natural causes before it got halfway to Africa.

Iran can't do much to our troops in Iraq. If—and this is a big if—they manage to talk the Shiite militias into throwing themselves against the fence in an all out assault on our forces, so what? You couldn't ask for a better opportunity to wipe out the Shiite militias. You hear speculation that Iran might mobilize Hamas and Hezbollah against our Iraq enclaves, but what would they use to mobilize them? Flying carpets?

A lot of folks also believe the talk that Iran might incite the rest of the Middle East into a full-blown major regional conflict, but how on earth are the Middle Eastern nations going to fight each other? The past 50 years or so have clearly demonstrated that none of them can successfully project conventional military power into any of their neighbors' territories, much less any other countries in the area. Iran's maritime forces might be able to close the Strait of Hormuz briefly, and could very well pull our Navy's pants around its ankles in broad daylight, but Iran would only do that if we attacked it for no real reason.

And as we've discussed, we have no real reason to attack Iran. We have no real reason to demonize them the way we have been either, except that making a boogie man out of the Persians is the best thing the warmongery has left to justify staying in Iraq, something they seem intent on doing despite the agreement young Mr. Bush just signed that says we'll leave.

Cmdr. Huber, thanks for your insighted commentary

Still way too many people that are unfamiliar with that Ahmadinejad interpretation.

Your highlight of the following point stirred the old memory of a lesson whose irony is worth noting.

I used to suffer the delusion held by many Americans, that our self-righteousness about MidEast policy was warranted and rightly informed seeing as how we were the 'free-world' leader during the Information Age.

My instruction was part of an introductory course, "Reality 101: the Arab perspective", as I first learned that Israel must have laid the groundwork for that convention of British wisdom, Iran's oh-so cynical ploy.

I felt pretty stupid to have been bashing Hamas, way back when, after I learned that the Israelis had played a deliberate, substantial role in transforming what had been a sort of neighborhood Muslim humanitarian effort into the organization with enough grassroots political appeal that it challenged and ultimately could displace the Jewish state's bigger enemy, the corrupt PLO under Arafat.

Those cynical Iranians are providing humanitarian aid to a child of the Israelis!

My other lesson that day was something like "take a grain of salt when consuming all the news that's fit to print."