Though O'Keefe styles himself in following the tradition of the muckrakers of a century ago, the purpose of breitbarting is quite different. Instead of exposing corruption, the purpose of brietbarting is to present the appearance of corruption. This is what O'Keefe, with diminishing success, tries to do. This was what made Breitbart famous before his untimely death.

The supposed "scandal" related to Representative Anthony Weiner's Twitter account is allowing this rather outspoken congressperson's many enemies to try to give legs to something that fell apart almost as soon as it was attempted.  This is where our politics has returned, to its low point in the early days of the Republic when the purpose was to trash, not to convince.

No one was fooled by this silly attempt to tar Weiner, not even his political enemies.  Yet they are still trying to use it to tarnish his reputation.

The cowardice of the drive-by shooter: Never put yourself at risk.

That's what Andrew Breitbart does.

With no responsibility to anyone, Breitbart can manipulate anything any way he wants, never caring that he will be caught, never caring who he hurts, for no one can do anything to him.

If they try, he can hide behind the shirts of the First Amendment to the Constitution.


Washington, DC— Watchdog groups have launched a new campaign to hold Andrew Breitbart, James O'Keefe and Hannah Giles accountable for the violations of criminal law they committed by illegally and surreptitiously recording employees of the Baltimore, Maryland ACORN office in the summer of 2009 and posting edited video versions online in order to harm ACORN. The campaign, www.IndictBreitbart.org, is a grassroots campaign to let law enforcement officials in Maryland know that ordinary citizens want accountability for those who break the law. Maryland’s Wiretapping and Electronic Surveillance Act prohibits both surreptitious recordings and disclosure of those recordings, with a prison sentence of five years and a $10,000 fine.

More manipulation, propaganda and incitement stir the airwaves and reverberate through the internet as the Shirley Sherrod controversy unfolds before us. This marks yet another time that a heavily edited, doctored and flagrantly erroneous video was successfully used to smear and tear down a target of the right-wing. And yet again, the source was found to be lacking integrity; the story told by the video a complete fabrication. But the public and officials still choose to react to such trash without question, even after repeatedly finding that the source has intentionally deceived and mislead in order to affect negative change.

How can we stop this mad dash toward insanity and push for a greater degree of accountabilty, if not from the sources of such misdirection then at least in some form or capacity that prevents a knee-jerk reactionary response to such trash without a pre-requisite pause to question and verify?

Perhaps we can't. Then again, perhaps by driving home the growing facts regarding the importance of personal due-diligence, it may be possible to at least provide some underlying guidelines to protect against further future misdirections. In the spirit of optimism that such efforts would prove useful, here's a list of documented distortions made by Breitbart, taken from Big Falsehoods: An updated guide to Andrew Breitbart's lies, smears, and distortions over on Media Matters. Each link goes to the appropriate entry on that site, where there's more information about each event:

Following the dissolution of Andrew Breitbart's smear of former Obama administration official Shirley Sherrod, Media Matters provides an updated look at how his sensationalist stories have been based on speculation, gross distortions, and outright falsehoods.

Over the jump, I'm concluding this piece by quoting selected excerpts from Holding America To Her Principles from the USPatriotsUnited blog, with permission. The excerpts focus on the importance of a free and independent media, and provide some hints to the role that such a media should play in our society today. I selected them in particular because they provide some insight about the "how" and "why" the rise of the blogosphere and citizen journalism in prominence is a result of the failure of the traditional media to faithfully discharge its role.

If you find this post useful, please talk it up and send links to it far and wide. We must, as a nation of concerned citizens seeking a better & brighter future, start encouraging others like us to do our part to quell the fires of incitement.

Andrew Breitbart, who published the video clip of Shirley Sherrod's speech that led to her forced resignation, tells TPM he doesn't have the entire video either and that the clip came to him from a source already edited. But he's seen enough: "I think the video speaks for itself. The way she's talking about white people ... is conveying a present tense racism in my opinion. But racism is in the eye of the beholder."

Who can take anything Breitbart and his gonzo criminal journalists cronies writes or produces seriously when they act on right wing lunacy without even a cursory look at the background sources and the facts? Below the fold is some recent news from Jed Lewison at dKos.

Co-conspirators Stan Dai and 25 year old WingNerds Gone Wild video producer James O'Keefe seen leaving the courthouse in a photo that O'Keefe did not have a chance to tamper with before I could: 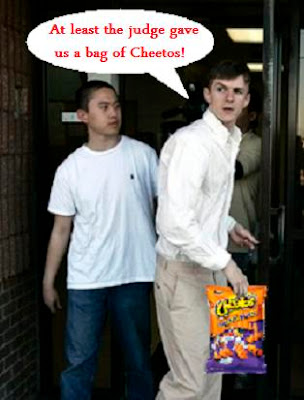 After getting caught messing with the phone lines in Senator Landrieu's Louisiana office, even videoing his and his co-conspirators with their pants caught around their felonious ankles himself, Magistrate Judge Louis Moore released James O'Keefe on bail to his parents' custody in New Jersey until his next hearing on February 13.

No word on whether or not the right WingNerd internet sensationalist and Rovian troll clone will dwell in their basement...