The 150th anniversary of the Fort Sumter bombardment that formally began the Civil War is tomorrow, and wrong-wingers throughout the South and the rest of America are fixing a big celebration. There’s going to be a seemingly infinite issuance of blogs, articles, radio interviews, and television appearances that will proffer a prettified picture of a brave and stolid South, courageously defending the “true conservative Constitutional” principles of states rights, individual responsibility, and limited government.

If you’re one of the many Americans who don’t really know that much about the Civil War, you have probably been perplexed by the number of wrong-wing Republican politicians who have made open statements of admiration the past year or two for the Confederate ideas of states rights and secession. This very lengthy diary is designed to fully inform you what the Confederacy was really like – a society suffering acutely from class differences; a society ruled by a slave holding oligarchy that was sickeningly arrogant and grasping, as well as racist. A number of myths about have been developed about the “Lost Cause” of the Confederacy for over a century, and those myths and lies are probably going to be repeated so often the coming days and weeks that you’re going to want to puke. My intent for this diary is to help shatter those myths and lies.

Crossposted from Daily Kos by GH, with permission.

A beat-up van pulls to a stop just up the road. A creaky screen door opens from the apartment at the end of the building. A young African-American girl runs out toward the van, barely hanging onto a gym bag that was obviously not meant for such a pint-sized carrier. The driver of the van, a middle-aged white man with glasses and a beard, throws the passenger door to the van open and the little girl tosses the bag onto the floor before climbing in. The apartment door, which had banged shut in the meantime, creaks open again as the girl's mother waves goodbye.

"Be good. Have fun," she tells her daughter.

"I'll have her back by eight," the driver replies as the little girl shuts the van door and waves goodbye to her mom.

As the van pulls away and disappears around a turn up the street, the girl's mother allows herself to slump against the door frame for just a moment. She lets go of a long sigh that betrays just how tired she is. She almost doesn't notice me as I approach her door to introduce myself.

Something that gets lost in the news about the unemployed is the fact that much of what used to be the backbone of this nation's economic prowess, the middle class, is now the working poor:

Imagine That: Working Poor On The Rise

After the Republicans crashed to economy in 2008 one thing became immediately clear. It would not be the folks who can afford it who would pay for the excesses of the last few decades. No, the elitist millionaires in Congress and the White House would make sure they kept their precious tax breaks. Yes, the only group that would be expected to sacrifice just like always would be the working American. Now a new study is out showing just how much they did sacrifice.

One can only hope that Capitol Hill is really ready to grow its heart a few sizes before things get any worse. But if the media and the politicians are unable to even address the issue of Class War honestly, I can't see them actually fixing the problems. Not in the the favor of the average American, for certain.

Below the fold is a hint from the ghost of Christmas past as to what this sometimes Grinchy like kind of guy may post on soon...

Santa Claus, The Weepies, Class War, NORAD Santa Tracker, The Working Poor, The Grinch, All That I want

We can sit back and worry about how these poor people will get by in this economy (the disaster economy that they created) or we can work from the pragmatic point of view of reality and tell them to suck it up and tighten their own damned belts instead of trying to squeeze the middle class and the poor even more than they already have to pay for their own disasters:

Bill Moyers talks about how Plutocracy and Democracy don't mix and the current "Plutonomy" and all of this in his last editorial on Bill Moyers' Journal:

When Dead Peasants =
Profits for their Employers:

Big corporations, including banks and convenience store chains in Houston, have taken out life insurance policies on their employees and received hundreds of thousands of dollars when a worker died.

The policies have become known as "dead peasant" policies, because they are taken out on low-level employees.

"It is a profit center for their business," said Scott Clearman, a Houston lawyer who has represented the families of local convenience store clerks killed on the job.

You would think it would be illegal for anyone to take out an insurance policy on your life without you knowing about it. MSN Money has previously reported on this, as well: 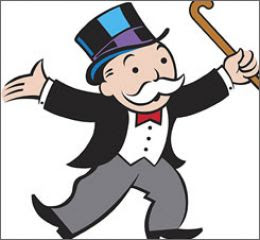 Via Heather at Crooks and Liars, where they have the video, Chuck Todd is doing some kind of Mr. Moneybags two step:

Here is what I thought was one of the more infuriating moments of last night's press conference. Chuck Todd with this doozie:

Todd: Some have compared this financial crisis to a war and in times of war past Presidents have called for some form of sacrifice. Some of your programs whether main street or Wall Street have actually cushioned the blow for those that were irresponsible during this economic period of prosperity, supposed prosperity that you were talking about. Why, given this new era of responsibility that you're asking for why haven't you asked for something specific that the public should be sacrificing to participate in this economic recovery?

Really, Chuck Todd? You're joking, right? If you had asked what he should have asked Wall Street to sacrifice, that would have been one thing. But the public? Unbelievable.

in 2 short paragraphs. A relatively long post for Atrios. Wheeeeeeeeeeeeee!

Others have made this point in various ways, but if the goal is to bail out the banksters and keep the existing too big to fail financial order in place with the same cast of characters in charge, then all of this sounds like a cunning plan.

If the goal was really to get banks lending again they'd be funneling large sums of money to healthy (mostly smaller) financial institutions who actually made sensible choices over the last few years.

Meanwhile a fire sale is going on:

In the corporatist scumbag selling out the American taxpayer kind of way:

There has to be more oversight. Those failed, incompetent and corrupt executive banking windbags stealing our money, right now, should be replaced. And the banks should be nationalized.

I am guessing it is going to get worse than this before the elites in this country start paying attention:

Wearing bright yellow hats and t-shirts with pictures of sharks and the words "Stop Loan Sharks," protesters had already targeted the home of John Mack, CEO of Morgan Stanley, at 6 Club Road, Rye, N.Y. earlier in the day.

At Frey's house, 10 Glenville Road, Greenwich, they chanted slogans such as "Fix our loans, save our homes." They placed furniture on the lawn to symbolize the dislocation felt by people who have had their homes foreclosed upon and been evicted, their belongings tossed outside by state marshals.

"We did it to make them feel what it must be like for someone to have their home foreclosed upon," NACA mortgage counselor Carmen Orta said.

Called the "Predators Tour" these actions were the start of NACA's "accountability campaign," an aggressive, confrontational protest aimed at several top executives of companies that refuse to allow NACA to renegotiate the terms of loans on behalf of members, according to NACA CEO Bruce Marks.

This is a fight over how to solve what is, IMHO, the 2nd Great Depression.

And the haves are already uncomfortable at giving up the 3rd vacation palace, the corporate jets, corporate paid and government subsidized vacation junkets and cutting back on their nannies time to save a few bucks. Just imagine what will have to be done to get them to pay attention to little people all around them - for no other reason than the fact that it is the right thing to do?

More below the fold via Land of Enchantment...