On Saturday, 14 May 2011, the US Army Corps of Engineers opened the first bay of the Morganza spillway as part of an ongoing effort to alleviate the swollen Mississippi river and avoid uncontrolled flooding further downriver. Via CNN:

The plan to open the spillway will still impact human populations - including the town of Butte La Rose, Louisiana:

Opening the spillway will redirect floodwaters from the Mississippi River through the Atchafalaya River Basin, which runs between Baton Rouge and Lafayette south toward Morgan City.

There are more than 800 homes in the Butte La Rose area of St. Martins Parish, which sits right in the flood path.

What's worse, the impact of the plan will be felt long after the waters recede:

Roy Dakka, a professor of civil and environmental engineering and director of the Center for Geoinformatics at Louisiana State University, predicted it will take weeks to months for the farmland to dry.

"Any existing crops are going to be toast," he said, citing the fields of corn, sugar cane and soybeans that will be covered with sediment. "Plus, God knows what's in the water and what gets deposited."

On the somewhat brighter side, officials are pretty sure that there won't be any failure in the untested system of levees, which could lead to unmitigated disaster.

That's not much comfort to the people impacted by the waters released into the spillway and redirected toward their homes and property, but it is - unfortunately - the best chance that experts have to reduce and mitigate the potential for a far more catastrophic flood in larger population areas.

It's for situations and events like this that our national infrastructure needs to be shorn up, bolstered instead of cannibalized as some sort of political bargaining chip.

This year, in particular, has seen quite a bit of severe weather already, and climate change theories imply that such severity is likely to increase.

Originally posted on Daily Kos. Reprinted here with permission at our request. - GH

This is a follow-up to an earlier diary about the threat posed by oil spilled by a freighter that broke up off Nightingale Island, home to approximately half of the world's endangered Northern Rockhopper penguin population.

Here is a brief recap of key events. On March 16, for reasons no one has been able to determine, a fully loaded freighter containing soybeans slammed into the rocks off Nightingale Island in the Tristan da Cunha archipelago (a World Heritage site) in the south Atlantic. The freighter broke in half and sank, dumping at least 1500 tons of fuel oil in the seas, which formed a heavy oil slick around the island, threatening marine life. The penguins attracted the most attention as they are a critically endangered. Because of the remote location, it took wildlife rescue teams nearly a week to reach the island by boat and set up operations. Wildlife biologists estimate that half of the 20,000 penguin colony have had some exposure to the oil and over 300 oiled penguins have already died.

One of thousands of Rockhopper penguins found oiled

"Unlike previous spills of this size, it didn't happen way out to sea and gradually approach such a vital conservation area. It struck right at the heart of the penguin colony and it's devastating to them."

- Sarah Sanders, Royal Society for the Preservation of Birds

Thanks to outreach and updates by marine biologist David Guggenheim, the difficult wildlife rescue operation is starting to get broader attention by NGOs and the media. CNN has finally covered the story. 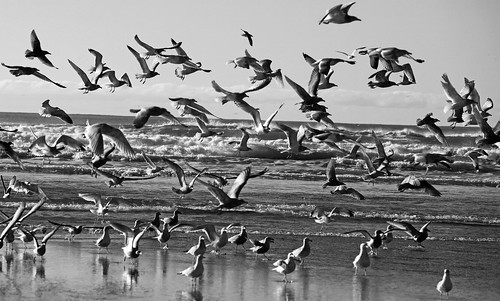 The Japanese disaster at Fukushima I is a human tragedy of striking proportions. As many as ten thousand citizens may be dead in the general catastrophe, with many more at risk for radiation poisoning at levels yet to be determined. The fact that Japan is a highly organized and wealthy nation in no way diminishes the intensity of the losses and pain experienced by the victims. (Image)

Political and economic implications will emerge rapidly. As the whole world watches, the Japanese experience creates windows of opportunity to learn how to avert future meltdowns at nuclear ticking time bombs placed throughout Europe, the United States, India, and China.

Events have overwhelmed the highly professional Japanese bureaucracy. In a late Saturday night report by CNN, the chief cabinet minister said that he presumed that there was a nuclear meltdown in reactors one and two, with three on the way. A nuclear regulatory official hedged by referring to the "possibility" of a meltdown, which he said could not be confirmed since workers couldn't get close enough to see. The same regulatory official told CNN,

"We have some confidence, to some extent, to make the situation to be stable status," he said. "We actually have very good confidence that we will resolve this." March 12

Experts outside the government referred to the situation as desperate given the use of saltwater as a last resort for cooling the nuclear material. ChartsBin.com has a great flash animation on a page titled The Largest Oil Spills in History, 1901-Present.

Check it out if ever you need to get an idea of the amount and placement of some of the largest oil-related disasters (aside from war) that the global ecology has had to endure.

These spills have an impact not only on any local environment affected but also on any systems that the pollutants pass through as they are dispersed far and wide through the ocean.

The current huge gusher in the Gulf will leave an ecological wound that will impact not only the local communities, but also other ocean-based life -- even if the oil remains relatively close in proximity. [more on affected species] And we already have plenty of indicators that "close proximity" is highly unlikely, with some predictions stating that the oil (including all the accompanying toxins and chemical dispersants) may ride the Gulf Stream for a trans-Atlantic boost to start impacting far-off places like Norway.  The more conservative estimates range from only affecting shores along the inner gulf to tainting shores along the eastern US seaboard.

It's not just oil itself that we have to worry about with regard to polluting our environment.  We have, as a species and particularly as a culture, often regard ourselves as masters of our environment, not subject to or impacted by it, the occasional wild storm tornado, earthquake, fire or flood notwithstanding.  Our habits and self-importance have led to an arrogance and disregard that is getting more difficult to ignore as our everyday overconsumption begins to stress, strain and compromise a variety of systems.  The impact of our negligence is becoming more difficult to ignore, too.  [pacific gyre, domestic drilling, mountaintop removal]

As a parting thought, here's a little something to think about: how much of an impact on our environment do we have simply in pursuit of pleasure? Here's a question and answer that may bear some further investigation, as well as some somber thinking:

How much pollution do cruise ships dump into our oceans?

The big oil catastrophe in the Gulf of Mexico is not the first to threaten a people's way of life.

Just ask the Ogoni people from Nigeria's oil rich central Niger Delta. Their experience over decades offers a model of things to come without serious changes in consumption and regulation.

Crack house: "A place "where people make, deal and smoke crack cocaine. This could be a house, an apartment, or a shack to name a few…" Urban Dictionary

The G-20 and big oil treat the earth as though it were a crack house. They set up shop, trash the premises, without regard to the surroundings -- all for the purpose of creating and selling a substance that people simply can't do without.

In fact, these oligarchs are far worse than crack dealers. Users can get off of crack. They can do the hard work of getting clean and do just fine. The oligarch crack daddies made sure that once we were hooked on oil, there was no way out. We either get well every day or we'll collapse as a society. You'd think there would be a law against it?   (Images 1 & 2)

Think Progress has some images from AP photographer Charles Riedel. CNN's Anderson Cooper filed this report last night from Grand Isle on birds drenched in oil as a result of BP's underwater gusher:

During the Christmas break a book I read called "From Edison to Enron", had the following lines in it :

Utilities, of course, were regulated monopolies that avoided competition and the free enterprise system, but Vennard wrapped them in the American flag while he attacked his public power opponents as socialists.
"And who'd want to leave a socialistic U.S.A. to his kids?

Remind you of what any particular 'News' network has been engaging in?
Or any specific, tactics employed to come up with talking points?

We are on a course for certain disaster if we don't slow down and make sure our "bridge fuel" is built with solid federal regulations!

Acute impacts to health will occur with these concentrations of chemicals in the air. The cancer and neurotoxins will also have an impact over the long term.

Watch this video to see what the Pickens Plan will do to America.

The following video contains a few of the 360 pictures taken on a short flight over small portions of Tarrant, Wise and Denton Counties. These pictures depict the destruction caused by natural gas production.

Industry is spending millions in propaganda to combat the FRAC Act that will allow citizens to know what chemicals are used near their drinking water and allow hydraulic fracturing to be regulated under the Safe Drinking Water Act.

Industry is inciting the public by using a power grabbing Federal Government versus states' rights spin. Check out this headline:

The information in the IOGCC press release is completely false! They claim that "states do a superb job of protecting human health and the environment through sound regulation."

Learn the truth to counter the spin:

Sophie in Sydney, reporting for the Times Online, tells of "scores" of eastern tarantulas, also known as "whistling" or "barking" spiders, have begun venturing about in public spaces in Bowen after heavy unseasonal rains pushed them out of their natural habitat.

Yes, the spiders are venomous. The spiders aren't considered "deadly" like other Australian spiders, but perhaps that's dependiing upon what one considers "deadly" -- something as big as those could likely scare a bloke to death without even having to hiss, whistle or bark, never mind actually biting anyone.  Often called "bird-eating" spiders, the eastern tarantulas don't actually eat birds, but "can kill a dog with one bite and make a human very very sick."

It's news like this that makes an Alaskan vacation look all the more appealing.