Juan Cole writes about the lawsuit filed on Wednesday agains the FBI and CIA.  Documents requested in a FOIA were never received. (Sound familiar?).

I had told the ACLU, “Americans don’t need permission from their government to write and publish their political opinions. If the Bush White House pettily attempted to use the CIA to destroy my reputation by seeking dirt on my private life in order to punish me for speaking out, that would be a profound violation of my Constitutional rights.”

Truthout has a story about it here.

Just a quick note to point to an item at LegalSchnauzer on threats by the United States Chamber of Commerce and its supporters against one of the Chamber's persistent critics, Velvet Revolution (VR).

Our readers will recall the VR campaign, StopTheChamber.com, as one that was started in 2009 to focus attention to possibly illegal activities of the Chamber, under its chief Tom Donahue,

Yesterday, LegalSchnauzer reported that a new letter has been sent to the FBI by VR's attorney, Kevin Zeese, requesting that the law enforcement agency investigate a series of threats against his organization.

These reportedly began shortly after launch of the Stop The Chamber campaign and included insults and explicit threats of violence.  They've apparently increased with VR's current advocacy efforts to track other Chamber activities such as the joint campaign financing effort with Karl Rove, AmericanCrossroadsWatch.org

[update] According to reports this may be Christian Militia and this may be Tea Party related. Below the fold...

Here is a video report from ABC's Action News in Detroit:

At this point in time it is unclear how and IF the raids are connected to Militia activity:

The FBI, the Department of Homeland Security and the Joint Terrorism Task Force are all involved in raids around Adrian that may be connected to a militia group.

The FBI conducted multiple raids throughout Saturday and into Sunday, with one of them centered on a property where known members of a militia live.

Members of a number of militia groups say that the raids are connected to raids in Indiana and Ohio. However, the FBI has not confirmed that.

Must be something big for a small army of FBI, Homeland Security and the JTTF agents to be moving on them but according to an MSNBC report the raids are not terror related:

It's not too late to stop the madness, but we're awfully close to falling over the edge and into the abyss. Remember when I issued this note of caution?

It's begun. The wackos have all begun to unwind and step out from behind their stately faux patriotism with their lunatic friends, fomenting rebellion and attempting to instigate violence. It's an insidious fifth column of propaganda and divisiveness, delivered through auspices of free speech yet fooling few in the rank desperation of their calls to incitement.

-- GreyHawk, Inappropriate Political Discourse: The Blood of Patriots and Tyrants
__________

Well, since then, the incitement and frothing nutty insanity of the right has grown significantly. Republican "leaders" are now openly telling their faithful to "get their guns" and buy more bullets, to prepare for a time to "take back" America.

"Take back" America? They "had" America for 8 years, during which they ravaged the nation and ran amuck; now, they want to "take it back"? From Glenn Beck's recent insane drivel about "the military and police are with us" to Rep. Trent Franks referring to Obama as an "enemy of humanity" the reichwing's anti-American hatespeech has been steadily escalating. It's spilling over into action more and more often now: people showing up with guns at rallys with the President, the assassination of Dr. George Tiller and the lynching, and subsequent smearing of Bill Sparkman.


These people are no longer operating with anything but the intent to incite violence and depose a legitimately elected, popular and intelligent leader in favor of a return to their corrupt, inept and destructive control of our nation.


We've covered some aspects of this behavior before (Boehner at CPAC calling all of Obama's Policies Socialist), and here's a quick list of other stories that have hit the wires lately:


This is beyond the pale, ladies and gentlemen.

It's time for leaders and lawmakers to stand beside law-abiding citizens to denounce and quell these unAmerican, dangerous, hate-filled acts and to assert an air of sanity back into the rapidly decaying mental state of the GOP's lunatic base.

And it's time to publicly denounce and censure all those GOP "leaders" who participate in these efforts to foment and incite violent dissention.

These bastards fought any efforts to hold them and the previous administration accountable during the Bush years while they gleefully bragged about how they were going to continue to do whatever they wanted. They sought a "permanent Republican majority" and a golden age of graft.

They destroyed our infrastructure and economy, and most importantly they LOST the last election.

They are now looking for any excuse to refuse the new President and Administration the courtesy of helping clean up the mess they made; they are now steadfastly determined to block any part of the new agenda, and to incite their more rabid followers to violence in efforts to further damage our nation.

This must end now, before any more blood is spilled. They must be held accountable, and forced to begin acting like adults instead of dangerously unbalanced psychotic thugs and legalized mobsters.

Excerpts from the infamous "bullet box" speech by Catherine Crabill, the Virginia Republican Party’s candidate for House of Delegates from the 99th District (full video here):

The Virginia GOP candidate is banging the drum and sounding the clarion call for all the right-wing nutjobs to rise up against the legitimate government of the United States because they can no longer undermine and betray the laws and the Constitution directly.

I hope the FBI and Secret Service are watching these lunatics, and preparing to act to prevent the violence that the GOP is trying so hard to incite.

While there has been a seeming consensus among progressives that because Obama has said that some "detainees" will continue to be held without trial, his moves to close down Guantanamo have fallen dangerously short, his appointment of Sotomayor seems to have broad-based support among Democrats and Independants although Republicans are already mouthing off as usual. Check out Conservatives Already Screwing Up Opposition to Sotomayor on Firedog Lake.

Well, as I live and breath..the FBI is asking people to "bring it on". Dang but only so far in CO and WY..must be a hotbed of corruption.

Amid renewed awareness, agents set up a hotline and e-mail address to gather tips

The Denver FBI wants to know whether government officials are engaged in criminal activities that violate the public's trust — such as awarding political favors in exchange for cash.

Update -- thank you to srkp23 on dKos -- who now has a much more detailed write-up and hat-tips our heads-up. Check it out.

From the New York Times via Mercury News, Eric Lichtblau and Scott Shane report that the FBI tried to fight detainee abuse at Guatanamo Bay -- to the point where they even kept a growing file detailing abuses marked "War Crimes File" up until a senior FBI official ordered the file shut down some time in 2003.

"Beyond any doubt, what they are doing (and I don't know the extent of it) would be unlawful were these enemy prisoners of war," Bowman wrote in an e-mail message to top FBI officials in July 2003.

Many of the abuses the report describes have previously been disclosed, but it was not known that FBI agents had gone so far as to document accusations of abuse in a "war crimes file" at Guantánamo. The report does not say how many incidents were included in the file after it was started in 2002, but the "war crimes" label showed just how seriously FBI agents took the accusations.

Thank you, George W. Bush, Richard B. Cheney and Donald H. Rumsfeld. Thank you, Paul Wolfowitz and Alberto Gonzales, David Addington and Stephen Hadley. Thank you, John Bolton and Harriet Miers, Condoleeza Rice and Colin Powell. And thank you, 109th Congress, specifically Tom DeLay, Dennis Hastert, Mel Martinez and Mitch McConnell, and all your little friends out there who went ape over Dick Durbin's comments when he first brought this abomination to light on the floor of the Congress in 2005. Your Republican majority and salivation over the prospect of a permanent Republican majority (HA! -- sorry, Karl!) led you to be known as the Rubberstamp Congress, and you upheld the title with foolish, arrogant pride.

You should all be so proud.

Your efforts have helped protect the Bush Administration -- and yourselves -- from the investigation of war crimes that you enabled and prolonged through this day and until the foreseeable future, at least until the last of your complicit supporters and obstructors of justice are dragged from the halls of Congress and replaced by lawful, upstanding citizens.

History will remember your names, your actions and your roles for many years to come.

This is material on some of the different ways in which people are approaching the question of how to deal with the fall out from the housing and mortgage crisis. There's quite a few links here, and not so much comment. I hope you have time to work through the links

So why is it harmless when Dick Cheney talks about the CIA’s use of waterboarding, but a violation of national security concerns when Kiriakou does? The answer to that is fairly obvious. If you disclose things classified as “secret” for purposes of advancing the political agenda of the Bush Administration, things are fine. If you disclose things classified as “secret” and articulate even the slightest criticism, then you’re obviously a criminal. We call this using the criminal justice system to attack perceived political adversaries. A Bush Justice Department specialty.

The good ol' days:
. . . several agents contended that military interrogators impersonated FBI agents, suggesting that the ruse was aimed in part at avoiding blame for any subsequent public allegations of abuse, according to memos between FBI officials. [Dan Eggan+Jeffrey Smith/WP:
FBI Agents Allege Abuse of Detainees at Guantanamo Bay, 30 Dec 2004.]
:: :: :: 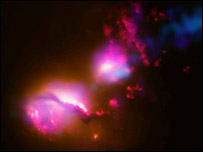 Paul Rincon/BBC: Black hole 'bully' blasts galaxy
"Black holes are famous for wreaking havoc on their environment. This particular black hole is disrupting its local region by dining on matter that wanders too close . . it is like a black hole bully, punching the nose of a passing galaxy."
[Image: BBC/Nasa]
:: :: ::
Scott Horton: Obligations Ignored (18 Dec '07):
Remember that young man with the alcohol and coke habit who totaled two cars in the course of a single year before being sent off to Alabama to dry out? He’s now in the White House. And he seems to have found a new drug: raw political power.
:: :: ::
Joe Hanel/DurangoHerald: State disallows some voting machines
DENVER - Secretary of State Mike Coffman decertified voting machines used across the state Monday, but most of Southwest Colorado's machines passed the test. . . Only Premier (Diebold) Election Systems passed all of Coffman's tests.
:: :: ::
Dave Dilegge/SWJ: Zinni's Considerations Revisited
General Zinni offers basic, common-sense guidelines here. Unfortunately, many of these guidelines are left behind at our military think-tanks and schoolhouses once the first round goes downrange. [On guidelines written by Zinni in February 2003.]