It was frustrating that one of the most important initiatives of the Obama transition was overshadowed by the Blagojevich scandal at Obama's press conference today. After a few remarks to the effect that the Illinois governor is unfit to serve the remainder of his term, Obama announced that he was nominating Tom Dascle not only to head the Department of Health and Human Services, but also to lead a White House Task force which has been set up to reform the nation's health care system. Predictably, all but one of the reporters asked questions about the scandal rather than the important news regarding the appointment. 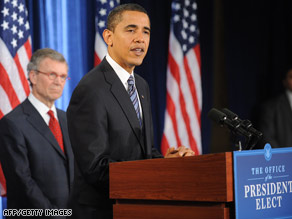 President-elect Barack Obama empahsized the fact that the shortcomings of the American system are not only destrroying the lives of people who cannot afford insurance but that it has serious ramifications for the economy. Half of the bankruptcies in the US occur because of families being unable to meet  health care costs and American corporations that offer health care benefits to their employees are becoming uncompetitive because of the sky rocketing costs.

In answer to the reporter who asked whether he could afford to follow through on his campaign promises that every American would be covered by high-quality, affordable health care, he gave a strongly affirmative reply. He introduced Daschle as "one of America's foremost healthcare experts.

Daschle, speaking after the President Elect reiterated Obama's message that we cannot afford NOT to reform the system.:

At a time that there is so much at stake, there is no question that fixing health care is and has been for many years our largest domestic policy challenge," Daschle said. "Addressing our health care challenges will not only mean healthier and longer lives for millions -- it will also make American companies more competitive, address the cause of half of all of our personal bankruptcies and foreclosures, and help pull our economy out of its current tailspin.

You can see Daschle's remarks here. The video and the photo from CNN.com