Please share this with your politicians IF they have ever used the words "austerity" or "entitlements":

A majority of the public opposes most spending cuts, especially cutbacks to education and popular entitlement programs, according to a new poll released Wednesday. The Gallup poll showed that over 60 percent oppose cuts to Medicare, Social Security and education funding.

Especially important if they have ever used those right wing framing words, austerity and entitlemnts, in the same sentence. That should narrow it down to about 98% of the politicians in office today.

Ironically, Giffords sent Palin a clear message to end the violent allusion in the ads.  In this brief video, she warns:

According to KOMO TV. in Seattle.

Spokane Police have arrested a man waving a meat cleaver at Sen. Patty Murray's supporters before her debate with Dino Rossi.
Officer Jennifer DuRuwe says 50-year-old Johnny J. Sieler was holding a knive and yelling profanities while he drove past a group of Murray supporters just before 5 p.m.

All we need now to complete the set is some idiot with a name starting with "C" who claims to have dabbled in witchcraft and clearly can't tell the different between between witchcraft (which, in modern usage as a religion, generally refers to neopaganism) and satanism...

Oh, wait -- nevermind. It's a good thing Christine O'Donnell is such a strong spokeperson for the Tea Party and "values movement." She can quickly rise up through the ranks of Tea Party apostate and become a co-chair of Fantasyland with Sarah Palin, who has ~also~ dabbbled in "witchcraft" -- African witchcraft, in fact -- as part of her holy "Christian" background.

I'm sure America and the world would just love to see what kind of damage restoration these two wackos -- and all their friends -- have in store for us.

Yesterday in Tokyo a conference brought together far right groups from Europe and Japan in an effort to better coordinate and advance their agenda of anti-immigrant, anti-Muslim and denial of global warming. That excludes such things as Holocaust denial and refusal to recognize Japanese brutality during World War II.

Just to make sure they weren't ignored the Japanese and European delegations paid tribute to Japans war dead by visiting Yasukuni shrine where such Class A War Criminals as Tojo Hideki are enshrined. Yasukuni is dedicated to showing the Japanese Imperial Army has heroes rather than the brutal force it really was.
Sadakazu Tanigaki the leader of the Liberal Democratic party will visit Yasukuni on Sunday the 65th anniversary of the end of World War II. He is just following a long tradition of LDP leaders and party members paying tribute at the shrine. They are so blinded by their hatred, racism and utter denial they are incapable of seeing the harm these visits cause.

The British National Party member Adam Walker and France's most famous Holocaust-denier, Jean-Marie Le Pen, will be among a group of European delegates to visit the Yasukuni Shrine, which venerates the militarists who led Japan's brief but disastrous rampage across Asia.

"I realise that there are war veterans in the UK who will see this as an insult, especially on V-J day, but Yasukuni is dedicated to the souls of men who died fighting for their country," said Mr Walker. "It's easy to point fingers now but these people were doing what they thought was right at the time."

From Sam Seder we get a not so safe for work commentary about the right wing creating controversy for political campaign fodder and, even worse, the Anti Defamation League's contortions on this issue:

"That's Bullshit" with Sam Seder: Pointing out Bullshit so you don't step in it. This week, Sam calls Bullshit on the right wing anti American whines about a Muslim community center slated to be built 2 blocks from Ground Zero and especially the hypocrisy on the part of the Jewish Anti Defamation League.

Video below the fold.

“We
need to stop looking at the tea parties as separate from the Republican
party, If we do that, we can stand up and create the biggest tent of
all.” 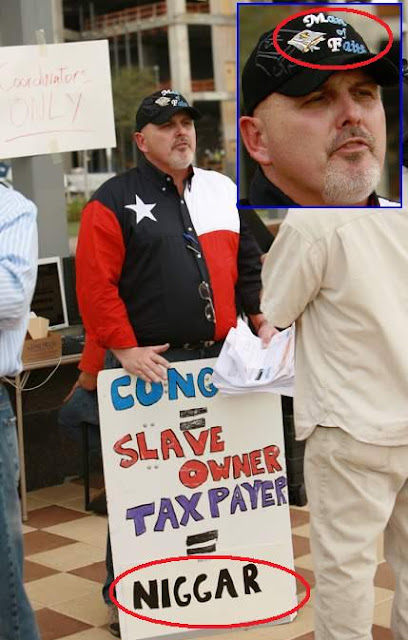 Via BarbinMD, we catch a glimpse into the mind of a "Man of Faith" and Tea Party leader:

But that's not just your typical, nameless, racist teabagger, that's the face
of Dale Robertson, the head of teaparty.org., and the man who is
devoted to "developing strategy to bring the Republic back under the
control of ‘We The People.’"

From the inset called "Other Voices" in the CBC.ca article Obama's Nobel win draws mixed reaction, a small subset of the comments:

"A bold statement of international support for his vision and commitment."
— Jimmy Carter, 2002 Peace Prize laureate

"We trust that this award will strengthen his commitment, as the leader of the most powerful nation in the world, to continue promoting peace and the eradication of poverty."
— Nelson Mandela, 1993 Peace Prize laureate

"In these hard times people who are capable of taking responsibility, who have a vision, commitment and political will, should be supported."
— Mikhail Gorbachev, 1990 Peace Prize laureate

"It is an award that speaks to the promise of President Obama's message of hope."
— Archbishop Desmond Tutu, 1984 Peace Prize laureate

"The Nobel prize for peace? Obama should have won the 'Nobel Prize for escalating violence and killing civilians.' "
— Taliban spokesman Zabihullah Mujahid

"I do hope that Obama will make efforts to work for peace and he will try to scrap the policies of Bush who put the world peace in danger."
— Pakistan Islamic leader Hanif Jalandhri

Mmm...notice how you could take this statement:

"The Nobel prize for peace? Obama should have won the 'Nobel Prize for escalating violence and killing civilians.' "
— Taliban spokesman Zabihullah Mujahid

And, with the following substitution, make it into what you're likely to hear from Reich-wing pundits today, like so:

"The Nobel prize for peace? Obama should have won the 'Nobel Prize for escalating violence and killing civilians.' "
— Radio personality Rush Limbaugh

It's sad, the way the lipstick washes off and the "true colors" of these self-inflated domestic terrorists runs off their backs...but at least once they've stepped up to show themselves for what they are, we'll be able call them what they are and they'll be unable to hide from their own flatulent bloviance.

Perhaps disappointed that death panels failed to frighten the tar and feathers out of the average American, the right wing appears to have settled on a new meme to undercut healthcare reform: the CDC will force males to undergo circumcision. (h/t Avahome.)

What did today bring?

Hmm. Gee. Why did FOX edit this out?

Tea baggers joke about Obama being waterboarded, shining the shoes of the Saudi king.

A Short Citizen's Guide to Kooks, Demagogues, and Right-Wingers On Tax Day

The teabaggers should give up the services their taxes pay for

There is so much wingnuttery out there today it is spilling over into an open thread...

I just wanted to congratulate them on their outstanding coverage of the Million Man March. It is the first time I have ever seen anything resembling "fair and balanced" coverage by the Fox News network, as evidenced in this David Shuster piece delving into the bowels of today's movement conservatives partaking in the corporate AstroTurfed protests across the nation which, I might add, are not really quite my cup of tea:

Visit msnbc.com for Breaking News, World News, and News about the Economy

Here we have the GOP's favorite far right wingnut Chucky Norris discussing his wish to destroy America with dreams of a Texas secession where he can reign supreme because he didn't get his way in the last elections with FOX news lunatic, Glen Beck, trying to start a wingnut revolution:

On Glenn Beck's radio show last week, I quipped in response to our wayward federal government, "I may run for president of Texas."

How much more will Americans take? When will enough be enough? And, when that time comes, will our leaders finally listen or will history need to record a second American Revolution? We the people have the authority according to America's Declaration of Independence, which states:

That whenever any Form of Government becomes destructive of these ends, it is the Right of the People to alter or to abolish it, and to institute new Government, laying its foundation on such principles and organizing its powers in such form, as to them shall seem most likely to effect their Safety and Happiness. Prudence, indeed, will dictate that Governments long established should not be changed for light and transient causes; and accordingly all experience has shown that mankind are more disposed to suffer, while evils are sufferable than to right themselves by abolishing the forms to which they are accustomed. But when a long train of abuses and usurpations, pursuing invariably the same Object evinces a design to reduce them under absolute Despotism, it is their right, it is their duty, to throw off such Government, and to provide new Guards for their future security.

When I appeared on Glenn Beck's radio show, he told me that someone had asked him, "Do you really believe that there is going to be trouble in the future?" And he answered, "If this country starts to spiral out of control and Mexico melts down or whatever, if it really starts to spiral out of control, before America allows a country to become a totalitarian country (which it would have under I think the Republicans as well in this situation; they were taking us to the same place, just slower), Americans won't stand for it. There will be parts of the country that will rise up." Then Glenn asked me and his listening audience, "And where's that going to come from?" He answered his own question, "Texas, it's going to come from Texas. Do you agree with that Chuck?" I replied, "Oh yeah!" Definitely.

For those losing hope, and others wanting to rekindle the patriotic fires of early America, I encourage you to join Fox News' Glenn Beck, me and millions of people across the country in the live telecast, "We Surround Them,"

Certainly explaining why Chucky was so fond of secessionist Sarah Palin...

If you play "yes we can" backwards it sounds like "nuke U.S.A." The real reason the right wing thinks he is not American is because they found a message hidden on one of the campaign song album covers: "bur ac i5 code"... They are all certain it is really his until-now unknown evil twin, Barry "the communist" Obama, from Kenya that is currently occupying the White House - just so you know where the name Barry really comes from.

Via the far right wing Newsmax, it appears even the wingnuts are tiring of Sarah Winky Palin's never ending quest to become relevant:

It is SO Important to pay attention to Down Ticket races, if we really want to put America on a New Track.

Even though Democrats won a slim majority in the House and Senate in 2006, the GOP has been able to block most of the New legislation that the Democrats have been authoring on behalf of the American People.

The Republican Strategy for the last 2 years, "Run against the Do-Nothing Congress in 2008".

How? By blocking nearly every Bill from Passing in the Senate, under the pretext of Debate, otherwise known as the Filibuster.