The day after the shooting at a combat stress clinic in Iraq, new data released to Salon shows soldiers committing suicide at a record-setting pace. Is combat stress the reason?

The Army is on a pace this year to shatter the record suicide rate set among soldiers in 2008, according to data released by the Army to Salon. And the numbers, obtained a day after a patient at a combat stress clinic in Iraq killed five, suggest that combat stress may be contributing to the spike in suicides.

In the final article in Salon's series, we ask what President Obama will do about the rise of suicide and murder among U.S. soldiers returning from combat.

This is the conclusion to Salon's weeklong "Coming Home" series, by Mark Benjamin and Michael de Yoanna, on preventable deaths at Fort Carson. You can read the introduction to the series here.

It's not about what President Obama will do, but what will this Country, who cheers on Invasions of innocents, than willingly supports their Occupation till they lose interest, do to control what these Wars and Occupations have done to those we've sent. Those of us from this countries previous shows of force and failed policies already know, and we won't allow it to happen again!! President Obama and our representatives in Congress are only that, Our Representatives, it's Our Responsibility to right the wrongs, of the policies, and to take care of those we call Heroe's but are quickly forgotten when they return!

The final installment of the Salon series starts out with this:

The above subject title is the forth addition in a week long series at Salon.com by Mark Benjamin and Michael de Yoanna on the returned Soldiers from Iraq and Afghanistan called "Coming Home". It's the open window into what happens to some after serving in man's hell on earth, Wars and Occupations of Choice!<!--Break-->

The subject title above is the third installment of a week long series of reports being run at Salon.com.

Salon.com has a series running all this week called "Coming Home", researched and written by Mark Benjamin and Michael de Yoanna.

The following is the description and lead in information on the series:

Promoted. Formatting adjusted. This might also be a good time to check out our PTSD Timeline. -- GH

Military Struggles With Response To PTSD

The Pentagon says 1 in 5 service members who come home from Iraq or Afghanistan suffer from post-traumatic stress.

Some find their experiences too much to bear. There were 115 military suicides last year, and 93 through just August of this year.

The biggest obstacle to getting those numbers down may be the military culture itself, reports CBS News correspondent Kimberly Dozier.

First Sergeant Jeff McKinney was a model soldier, a newlywed, and a new father.

Now, his family says, he's a casualty of war. Two wars really: the war in Iraq, where he served honorably, and the war within the military over how to deal with post-traumatic stress disorder.

"He needed help and nobody helped him," Chrissy McKinney said. "And that's the reason why he died."

For two years Jason Ermer fought to make it home from Iraq. Last New Year’s Eve, he gave up.

It was just after midnight on Dec. 31, 2007, and bitterly cold outside, when two Ogden police officers knocked on the door of Jason Ermer’s home.

Earlier that night, Danny Murchie, an addictions counselor at the U.S. Department of Veteran’s Affairs (VA) Salt Lake City office, had called Ogden police and asked for a courtesy check on Ermer, his 28-year-old client, a recent Iraq war veteran. Murchie had talked with Ermer and feared he might harm himself.

When no one answered at the Ermer home, police followed footprints in the snow a few blocks into the Ogden Canyon foothills. Near a large boulder, a man’s body lay in the snow, blood pooling near his head. His breathing was slow and gargly.

Thousands of Soldiers are no longer with us but especially with their families, this or any coming Thanksgivings!

This message comes from the family of only one soldier who did come back, but not the same as when he left, and will not be celebrating Thanksgiving or any other Holidays with his family, but is certainly not forgotten.

This soldier, and many more, numbers unknown because no one counts them, are still War Casualties but not in the numbers listed above.

As the Lucey's say in the beginning there is alot to found about their son on the internet, as many will find there also is about many of those who served in our recent conflicts, Wars of Choice, I'll just give a couple of links.

'Something happened to Jeff'

Jeff Lucey returned from Iraq a changed man. Then he killed himself. 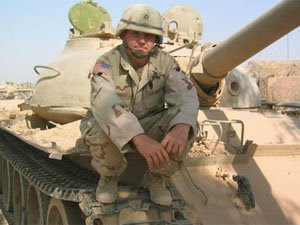 Sgt. Adam Gray during his tour in Iraq, sitting on top of a tank with Battalion 1-68. Gray was troubled by what he did when he was assigned to guard Iraqi prisoners. (Photo courtesy Tony Sandoval)

American RadioWorks investigates the mysterious death of an Iraq War veteran and uncovers new allegations of detainee abuse. This powerful documentary follows members of a U.S. Army unit and their struggle to come to terms with what they did, and didn't do, in Iraq.

That will bring up their NPR Station radio player, it's about 54min long.

"that I will support and defend the Constitution of the United States against all enemies, foreign and domestic"

I posted up about The Iraq Vet that killed one police officer and wounded another:

OAK HILL The body of a Caldwell County man wanted for killing a sheriff's deputy last week was found in a secluded area of his property today, the victim of an apparent self-inflicted gunshot wound, authorities said.

Back in February, the Marines released their military branch's updated suicide statistics. They revealed the number of Afghanistan and Iraq combat troops and veterans who took their own lives in 2007 had doubled over the previous year.

Earlier this month, the Army reported its own current soldier suicide data, reflecting another year of record increases. And just last week, the VA chimed in with their latest OEF/OIF veterans suicide figures -- also another record-breaker -- for its Afghanistan and Iraq veteran clients.

What follows below the fold is a partial, quite incomplete look at where we're at today as far as Iraq and Afghanistan troop/veteran suicides are concerned. It's exasperating work; but, I'm in good company. Congress for years has struggled to get a straightforward and full data set out of the DoD and the VA, too.


Though the structure that holds this portrait together is Proustian, the pace is anything but a meander, and neither is the Boudreau’s style ponderous. Instead, Packing Inferno is like a well orchestrated commando raid. Reading it, you are pulled along, never quite sure what the next paragraph will bring, but by the end, you’ve seen the image in the mirror and are haunted by its presence.

32,000 Vets To Be Warned About Suicide-Linked Drug

32,000 to be notified? 32,000 Veterans, how many are probably suffering from PTSD/Depression already, apparently are in this program unearthed by ABC News and the Washington Times, 32,000!

Look I'm so F**KING PISSED OFF AGAIN, I really can't wrap my mind around the words to describe this BULLS**T!!

I may, or may not, add more, or just let comments take charge.