Further explorations of the Tea-Bagged Right's 'Neverland' fantasy world, taken from an ongoing discussion at DelphiForums. Here, one of the folks mentions a common element to a popular form of "I've found Jesus" stories, and my response. Feel free to pick up the conversation in the comments below.

>> It's common in some right-wing Christian circles to claim 'dabbling in Witchcraft' before they found Jesus as a way to strengthen their conversation story.

Those stories almost always fall apart when looked at by any actual Modern Pagan and/or Witch. <<

Those stories use a type of common myth-perception that reinforces the need to ~not~ bother to verify facts, as those facts would shatter their ongoing narrative with shards of awareness from the realm of reality.

That won't do for those who prefer to live in the comfy-zone of mentally unchallenged thought and wild conspiracy-theory based fantasy.

From the piece that I'd posted on ePluribus Media yesterday:

All we need now to complete the set is some idiot with a name starting with "C" who claims to have dabbled in witchcraft and clearly can't tell the different between between witchcraft (which, in modern usage as a religion, generally refers to neopaganism) and satanism...

If any of their fellow myth-perceiving Tea Bagged masses happen to stumble across the article, they'll have the ability to read the linked Wikipedia citations.

The vast majority won't, judging from past experience. A few enterprising ones may check to see where the link goes and will likely announce "Wikipedia? That's not a reliable source!" and the rest of the rabble will take up the call like a shield, reinforcing their collective mental shield against any assault of information or reason and protecting their groupthink mentality from harm.

It's what they do.

Buzzfeed has a whole bunch of signs from the Boston Common Tea Party getting punked but here are a few for your viewing pleasure: 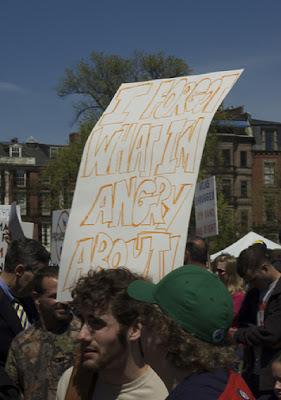 In a discussion over on DelphiForums, a poster by the name of Frank had made some observations regarding the bleak situation that Barack Obama inherited when he stepped into the Oval Office. One particular sentence jumped out at me -- something about two wars.

No! -- the cry of my subconscious was instant, unexpected and vehement. Not two! Four!

I almost felt like I was in an episode of Star Trek: The Next Generation. Over the jump, I'll repeat my reasoning.

So, Dick's got a brand new tea bag.


Freedomworks' Dick Armey is an astroturf-lobbyist whose job is to create a public outcry on behalf of the corporate interests that will benefit from the policy change that Freedomworks is hired to shepherd through Congress.


Dick's got a new message for the teabaggers. Watch this MSNBC report, in which he corrects Andrea Mitchell, the NYT, and all of the other media who just don't understand his teabaggers, no matter how much coverage they get.

If you've seen the recent dKos diary by Queen of Swords or the article referred to within by David Frum (infamously titled Waterloo), one crucial item stands out: the admission that Republicans have willfully & intentionally conducted a vigorous program to whip up "hysterical accusations and pseudo-information" -- in short, they've knowingly lied to their base and the nation in order to oppose the initiatives and policies of this President and the Democratic majority.

This demonstrates their willful complicity in undermining and obstructing government for political purposes, not for the benefit of their constituents. It also deals a hefty blow against teabagger lunacy, which has built up a head of steam based solely on the misinformation generated by the GOP efforts to "destroy" the presidency of Barack Obama.

The Atwater school of politics may at last be coming to an end, or at least entering a much-needed recession.

Hat-tip to Helen of DelphiForums, and to Wikipedia for the text. The following is a studied portrait of a TeaBagger neonazi by none other than Rod Serling, circa 1963. -- GH

Portrait of a bush-league Führer named Peter Vollmer, a sparse little man who feeds off his self-delusions and finds himself perpetually hungry for want of greatness in his diet. And like some goose-stepping predecessors, he searches for something to explain his hunger, and to rationalize why a world passes him by without saluting. That something he looks for and finds is in a sewer. In his own twisted and distorted lexicon he calls it faith, strength, truth. But in just a moment, Peter Vollmer will ply his trade on another kind of corner, a strange intersection in a shadowland called the Twilight Zone.

Where will he go next, this phantom from another time, this resurrected ghost of a previous nightmare - Chicago; Los Angeles; Miami, Florida; Vincennes, Indiana; Syracuse, New York? Anyplace, everyplace, where there's hate, where there's prejudice, where there's bigotry. He's alive. He's alive so long as these evils exist. Remember that when he comes to your town. Remember it when you hear his voice speaking out through others. Remember it when you hear a name called, a minority attacked, any blind, unreasoning assault on a people or any human being. He's alive because through these things we keep him alive.

The biggest danger to America today is the one presented by those who most loudly beat their chests to proclaim their patriotism, while trying to use it as a tool to spread hatred, fear, disillusionment and racism.

Yesterday Dailykos diarist, 'the girl', hit the recommended diary list with her post of the powerful impact one person may produce in the simple act of shining bright light into the dark space created by deception.

The inherent power over an adversary that is achieved by lying is particularly odious in application to public affairs.  Large sums of money are invested by private concerns to intentionally distort public understanding of matters of great importance, like the current policy debates on health care or climate change, for example.

Big Tobacco and Big Oil have spent enough money in recent decades to create and sustain whole industries designed for the single purpose of misleading citizens and the decisions of our policy-makers in public affairs.

Because fairness is not part of the organization charter, corporate concerns have only the bottomline at stake which ultimately requires directors --NOT to equitable policy debates but-- to maximize shareholder value.  And, so, we documented the secret memo series through which Big Tobacco bought the GOP half of American party politics to deceptively achieve protection from legal liability beginning in 1994.

So, the big money behind the teabaggers has been trained on the biggest lies for decades already.

When 'the girl' found them also infringing the Energizer Bunny trademark (the prohibited, unfair use of a registered corporate icon) with its use in attacks on public health care policy plans, her notification of the trademark owners at Eveready was enough to move them to consider legal action.

In the spirit of the post by Luaptifer, yesterday, of BradBlog's "Tea Party Express II: Rise of the Teabags", I wanted to share with you a compilation video CtBob did of some of his footage from Tea Party events in CT, mixed with some interviews and background on some of the people involved with the originally documented material.

Parts I and II of Brad Friedman's report from the christening of the second wave of teabagging that has striked stricken struck set out across the country from this departure in Southern California.

Brad allows teabaggers to make their point (which is his point) in a very effective way: repeated invitations to enunciate, for example, the list of freedoms taken away under the Obama Administration, left embarrassing voids or the trailing ellipsis.

Some people are too stupid to be parents.

And remember, ladies and gentlemen, that watching too much of the antics of these stupid people may cause your head to burst into flames, because ...

Raw Story carries a picture IDing town hall riots who were deployed in a similar capacity by the Repbublican vote-stealing apparat in 2000. They also have feature  video from  MSNBC's Maddow show.

On November 19, 2000, a funny thing happened in Florida. You may remember this.