Breaking Up The Banks

I got kind of tee'd off with all the nonsense floating around about t-parties for the last few days. Or was it PO'd, I don't know. But you do have to laugh, what goes around comes around. Didn't anyone tell them its all been done before?

They just got the wrong darn Tea Party. That should larn'em books are to be read, not burnt.

Glen Beck for March Hare? It works for me. I think we could sponsor a competition for Dormouse and Mad Hatter. Any takers? But maybe Glenn Beck isn't the best stand in for the March Hare. I've not really seen Hares much over here. But over there, where they have real hares, the phrase "Mad as a March Hare" has quite a long history, almost as long as the Spanish Inquistion, and seems to originate with Thomas More who lost his head under different circumstances.

The first record of the belief in their madness, or in this case their brainlessness, was circa 1500, in Blowbol's Test reprinted by W. C. Hazlitt in Remains Early Popular Poetry of England, 1864:

Of course, the phrase 'hare brained' refers to the same behaviour. This is also old and is referenced in Edward Hall's Chronicle, 1548:

"My desire is that none of you be so unadvised or harebrained as to be the occasion that ..."

The first citation that uses the phrase in a form we now know it is in 1529, in Sir Thomas More's The supplycacyon of soulys:

"As mad not as a march hare, but as a madde dogge."

The phrase has been in continuous use in the language since the 16th century. It was well-enough established by 1546 for John Heywood to include it in his collection - A dialogue conteinyng the nomber in effect of all the prouerbes in the Englishe tongue.

See other phrases from Heywood's collection - 'don't look a gift horse in the mouth', 'out of sight, out of mind'

I think this Heywood was the son-in-law of More, and the great-uncle of John Donne. I didn't make any of this up, but found it here. Here's a picture of what they do. They are kind of big rabbits which behave like kangaroos. They are boxers. Not hard to imagine Glenn Beck doing this kind of thing in the Green Room is it? Especially after that Columbia University Professor collapsed on him the other day.

Dormice aren't really found over here outside of zoos either, I don't think. The dormouse can hibernate six months of the year, and is named from the French "dormir." They were considered to be a delicacy at various times, and would have been counted among the consumibles at tea parties, according to Wikipedia. Here's one asleep. Perhaps that looks more like Glenn Beck. Shall we do a poll? How do you feel about the question? Which do you feel, in all honesty and sincerity, looks more like Glenn Beck? Would you feel it was the March Hare? Or would you feel happier if you chose the dormouse? Whichever it might be, do you feel seriously they are a lot alike, somewhat alike, a little bit alike, not a lot a like, or even not a like at all?

Of course, I don't believe anyone that we know of has seen Glenn Beck's tail, and that would probably be decisive. 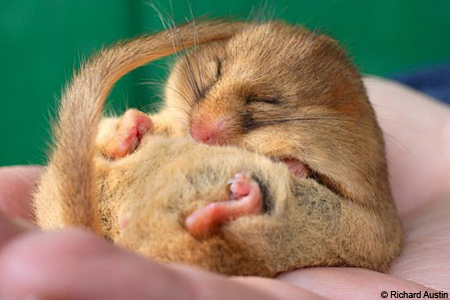 Doesn't the Dormouse have a cute one? I bet Beck's feet are more like the dormouse's little pinkies than the hare's. But you know, wouldn't it be more scary to bump into a snarling, enraged dormouse than one of those kick-boxing hares dancing around? When they close in on Glen Beck, if you're allowed to watch that,  on all that screen-filling  pasty pink and sandiness, think toothy  Dormouse. I think it works much better than the Hare.

But, I hope you do know, there again, that both these creatures are edibile.That's a big difference right there, because I think Beck just makes me want to puke.

One of the most notable characteristics of those dormice that live in temperate zones is hibernation. Dormice can hibernate six months out of the year, or even longer if the weather remains sufficiently cool, sometimes waking for brief periods to eat food they had previously stored nearby. During the summer, they accumulate fat in their bodies, to nourish them through the hibernation period[1].

It is from this trait that they got their name, which comes from Anglo-Norman dormeus, which means "sleepy (one)"; the word was later altered by folk etymology to resemble the word "mouse". The sleepy behaviour of the Dormouse character in Lewis Carroll's Alice's Adventures in Wonderland also attests to this trait.

The edible species was considered a delicacy in ancient Rome, either as a savoury appetizer or as a dessert (dipped in honey and poppy seeds). The Romans had a special kind of enclosure known as glirarium used to rear dormice for the table[1]. Dormice to this day are eaten in Croatia and Slovenia. [2] Dormouse fat was used by the Elizabethans to induce sleep.

Hare turns into nice casseroles and pies, and also pasta dishes, like this one with papardelle

I'm not going to say anything about the Mad Hatter at all, except to point to this after all I started intending to write something about the April 11th Break up the Banks rallies, because I thought all the coverage of tee parties was over the top. Those rallies did happen on the 11th. There's another round planned for June 8th. I think it is more important than worrying about crazy tea parties. This link will take you to a selection of  pictures from rallies held around the country. Just scroll down. Here's one of them.

Much happier and more vigorous looking crowd than the ones that got featured in the tee-party round-ups don't you think. No furry little creatures at all, and no serial mercury sniffers either.

The web site for Anewwayforward has been put together by the Participatory Politics Foundation. They also work on a site which monitors Congress and what's going on there called OpenCongress. This next site is not connected to anewwayforward as far as I know. It is a site which provides information about banks to investigative journalists. The blog page at anewwayforward has a list of links to everyone promoting the "break up the banks" pledge and related activities. Maybe we should get on the list.

Is it me, or does the sleeping dormouse look a little like Geithner?

Geithner has a way with words. He uses someone else's to say what he wants to say in a misleading and duplicitous way.

He reminds me of something perhaps more dangerous, like one of these.

I thought the appointment of Geithner signalled a break, because he had a full head of hare. But appearances seem to have been deceptive. It is not real hare, or even jugged. This is about the hares of champagne who were afraid of chitterlings. And I'm sure you can understand that, but I happen to know people whose lives have been completely changed by chitterlings. So there. I mean, I don't really think Geithner is comparable to a weasel, and I don't think it would be proper to develop the argument why he is comparable to chittlerlings, because we're all so interested in the inside story it is hard to believe there is so much waste. But I think you'll recognize the parallel from the discussion of head shapes if you have the intestinal fortitude to read some of this ancient nonsense.