Gaza Views: A Report on the Situation in Gaza

This is a report by Felice Gelman of a trip that she took to Gaza last month that was organized by Code Pink. She was part of a delegation from the Wespac Middle East Committee. It is posted with her permission. More reports and pictures can be  foundon her site. 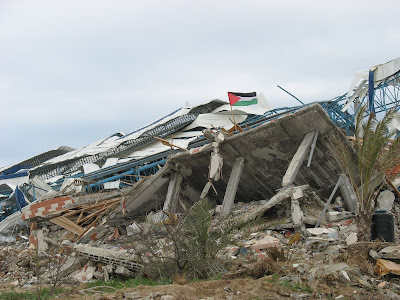 How can a description of a trip to Gaza not mention the destruction?  Truthfully, what I saw was so upsetting I was not sure how to write about it.  It's hard to imagine.  The Israeli invasion cut two swaths of destruction -- one north, one south -- across Gaza from the Israeli border to the sea.   Each is perhaps 1/4 or so miles wide.  In the south, I saw agricultural land completely destroyed.  Tank and bulldozers plowed under the topsoil and everything that grew on it.  I thought of the Romans who sowed salt in the lands of Carthage.   It will take a long time before anything grows in the areas I saw.
In the north, where I had much more opportunity to look around, apartment buildings, homes, factories, mosques, and schools were all erased or collapsed.  Whole neighborhoods were disappeared.
The rest of the work of destruction was much more discriminating.  I saw three types of targeting:
Factories broadly were destroyed.
An entire industrial zone was flattened.  Tile factories, glass factories, cement plants -- anything that might be used for rebuilding was targeted.  I saw two large dairies that were destroyed.  In addition, throughout Gaza, individual factories and workshops were bombed.  I know Israel claimed it was targeting areas that manufactured missiles, but I'm sure the cows in those dairies were surprised to learn they were enemies of the state of Israel.

Civil institutions were targeted and destroyed.  Every police station was bombed.  (The Israelis did this in the West Bank in 2002, with the predictable result that the Palestinian Authority was unable to govern and to control militants).  The Palestinian Parliament building was bombed. 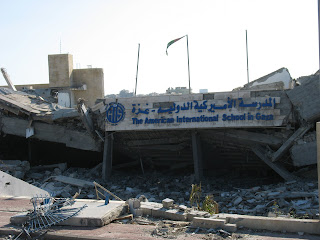 The American International School, Gaza's finest high school, was destroyed.  Several medical clinics and hospitals were bombed.
And, of course, many mosques were destroyed.  These were promptly re-established in tents. 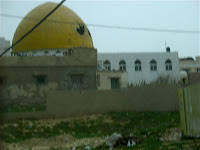 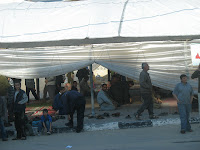 Homes outside of the collective punishment corridors of the north and south were randomly targeted.  Some belonged to members of Hamas, a number appeared to have been randomly selected.  Many of these were hit with missiles launched from drones.  There is some testimony that drone operators in Tel Aviv were ordered to target any buildings where they saw someone on the roof.  (This from The Nation: "That Israel's drones essentially treated anyone on a Gaza rooftop as a target was apparent most of all to its own solders.  'They told us not to go up on the roofs because everyone who goes up on the roof is going to be taken out' an IDF medic stationed in the Zaytoun area on the outskirts of Gaza City during the campaign told Human Rights Watch.  His comrades made clear, he said , that if he went up on the roof of a Palestinian home, 'somebody from the air will take you down.' "   Homes in Palestine have flat roofs where laundry is hung and children play.   Others appear to have been bombed almost randomly.  The family I stayed with in Beit Hanoun lived in a large home in an orange grove.  The houses on either side of them, perhaps 30-50 yards away, were bombed flat.  They told me that no one in those homes had anything to do with Hamas.
The worst destruction, however, is of a generation.  The children everywhere were shellshocked-- traumatized and very solemn. 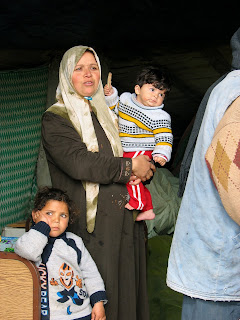 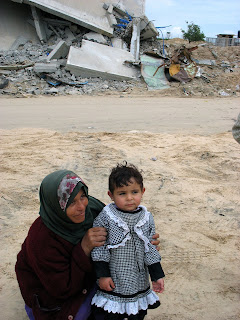 Teachers and counselors are working very hard now, with very limited resources, to try to help.  They have a big job.

We saw many many -- I would say thousands probably -- of people living in tents.  Tents seem to be the one relief supply that is available in sufficient quantity.  It was the saddest thing I saw in Gaza.  Not because people lost their homes.  Natural disasters cause that all the time.  But people have the opportunity to rebuild, even without substantial aid and assistance, we humans make, find, struggle to create a home for ourselves and our family.  In Gaza, Israel's attack has returned tens of thousands of people to the place their parents struggled up from -- the tents of the 1948 expulsion of Palestinians from the cities and villages of their land.  And now Israel, the U.S., and Egypt are conniving in a horrific blockade to insure they cannot rebuild.  The people in tents will stay in tents for the forseeable future. 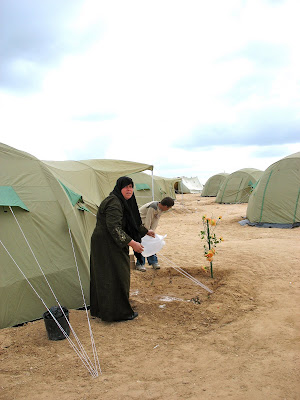 palestine, Israel, Gaza
0
No votes yet

or ready-made excuses, the Israelis have devised rationales for a generation:

Civil institutions were targeted and destroyed. Every police station was bombed. (The Israelis did this in the West Bank in 2002, with the predictable result that the Palestinian Authority was unable to govern and to control militants). The Palestinian Parliament building was bombed.

With a no-longer functioning capacity to govern, what other pattern can emerge from such a mosaic of images? And, so, those who govern by missile obviously have no choice but to cyclically fill the vaccuum in the coming decades.

When does the violence end?

I don't know why Israel today believes that the Palestinians will be any less attached to the land than the Israeli diasapora of yesterday were. It's lunacy.

Hat tip to Fiori for this find.

www.reuters.com/article/worldNews/idUSTRE5321K820090403
sent by Fiore since 6 minutes
South African judge Richard Goldstone urged Israeli and Palestinian authorities Friday to cooperate with a U.N. investigation he is heading to examine alleged war crimes in their recent conflict. The former war crimes prosecutor said that the fact-finding mission would review the conduct of both sides "before, during and after" the Israeli offensive in the Hamas-ruled Gaza Strip from December 27 to January 18. The other members of the inquiry are Pakistani human rights lawyer Hina Jilani, British international law professor Christine Chinkin, and retired Irish colonel Desmond Travers. Goldstone, who is Jewish and has served for years as a governor of the Hebrew University in Jerusalem, said that he had spent many days and "sleepless nights" deciding whether to accept the mandate, saying the request came as "quite a shock."

JERUSALEM — Two women serve in Israel's new Cabinet, but some Israelis would rather not see them.

Ultra-Orthodox newspapers consider it immodest to print images of women.

The daily Yated Neeman digitally changed the photo, moving two male ministers into the places formerly occupied by the women.

The weekly Shaa Tova simply blacked the women out, in a photo reprinted Friday by the mainstream daily Maariv.

No response was available from the two papers.