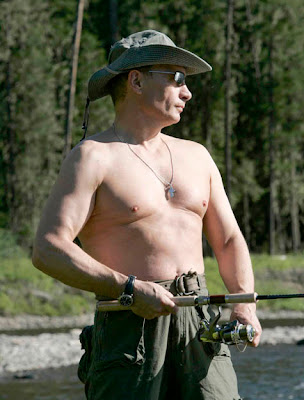 Vladimir Putin has gone from being Russia's president to being Russia's Dick Cheney. As Prime Minister, he still has all the real power but has shed the accountability that goes with being the head of state. So while Putin is undoubtedly the dastard who decided to put the clobber on Georgia, the guy who has to take criticism for it is Putin's political Pinocchio President Dmitry Medvedev. Being the man in the hot seat sort of makes Medvedev Russia's George W. Bush, except that Bush has never really been held responsible for anything. (Bush is only sixty-something and he's only been on the job for seven and a half years, what do you want?)

Medvedev is like Bush in other ways, though. Tuesday August 12, he told the press "he had decided to end the campaign after restoring security for Russian citizens and peacekeepers in South Ossetia," so like, Bush, he enjoys acting like he's the "decider."

But even as Medvedev announced he was ending the operation, fresh reports emerged of Russian warplanes bombing the Georgian town of Gori. That Medvedev says things to the media that directly contradict reality makes him frighteningly like our young Mr. Bush.

It may simply be that Medvedev has a penchant for saying one thing and doing the opposite, which would make him a Dubya-class hypocrite. There are of course, many ways to commit hypocrisy, and Mr. Bush is adept at all of them. He's especially handy with the kind of hypocrisy that indicates "irony" will be stricken from the next edition of the Newspeak Dictionary.

On Monday August 11, Mr. Bush castigated Russia for having "invaded a sovereign neighboring state" and decreed: "such an action is unacceptable in the 21st century." This came from the man who kicked off the New American Century by invading a sovereign state half way across the world and lied about why he was doing it.

"Russia's government must respect Georgia's territorial integrity and sovereignty," Bush said, even as his henchmen ignore the Iraqis of Iraq's demand that the U.S. recognize the integrity of sovereign territory by agreeing to leave it.

Bush's echo chamberlains joined in the condemnation of Russia. That senior U.S. official we've heard so much from since the New York Times helped Bush sell a false casus belli for the invasion of Iraq said that Russia's use of strategic bombers and ballistic missiles against Georgia's civilians was "far disproportionate" to Georgia's alleged attack on Russian peacekeepers. I'd love to get my fingers on that senior official's throat and ask him how "proportionate" to anything he thinks America's use of cruise missile equipped nuclear submarines to bomb Muslim weddings in the hope of accidentally killing a terrorist is.

U.S. Ambassador to the UN Zalmay Khalilzad oopsed his way out of staying anonymous when he pulled a John Bolton and lost his cool in front of a group of grown ups. Russian Foreign Minister Sergei Lavrov apparently told Secretary of State Condoleezza Rice that the president of Georgia Mikheil Saakashvili "must go." Condi apparently let that item slip out in front of Zalmay, and Zalmay blurted it out in front of the UN Security Council.

Lavrov's answer was pretty good: "Regime change is purely an American invention," he said. He's just about right, and I'm starting to think America is the only country left whose leaders are dumb enough to think that toppling a regime and replacing it with a sock surrogate is a good idea. Look how things have gone in Iraq and Afghanistan and Pakistan, and the Bush yahooligans are still raving about "regime change" in Iran. Franklin-class insanity, that is.

The triple reverse knuckleball irony of this situation is that while the Bush scumbags are accusing the Russian scumbags of pulling the exact same scum baggery the Bush scumbags pulled, the Russians' latest scum baggage actually looks more like the relatively heroic measures Big Daddy Bush took in the first Iraq war. If the Bush administration spin merchants were working for the Russians, the story would go that mean old Georgia decided to beat up on poor little South Ossetia and Abkhazia and the big strong Russians swept in to save the day for the underdogs, just like America did when Saddam Hussein invaded Kuwait.

Early on the morning of Wednesday August 13, Medvedev and President Mikheil Saakashvili of Georgia announced they'd reached an agreement whereby Georgia would make nice and Russia would go home, so we can quit camping out in the backyard fallout shelters and go about our normal lives, I guess.

Russia's field trip to Georgia wasn't likely to amount to much. It was physically impossible for their monkey business to encroach on our monkey business. Turkey, Armenia and Azerbaijan separate Georgia from Iran, and the bananastans are clear on the other side of the Caspian Sea. The only spillover problem would have involved refugees who would have sought refuge in Russia, and don't think for a second that wasn't a large part of the reason Medvedev stepped in to stop things as soon as Putin thought he'd made his point.

The main signal Putin sent with his Georgia outing was that Russia is indeed willing to go along with the revival of the Cold War that the American neoconservatives are trying to produce. In Cold War II, Iran and Venezuela will assume the parts originally played by East Germany and Cuba respectively, and the U.S., Russia and China will reprise their original roles.

Don’t move back into the shelters just yet, though, fellow citizens. The Cold War sequel will be far more carefully choreographed than the original. What we just saw in Georgia was a reasonably well-controlled rehearsal and demonstration. It gave Medvedev a chance to practice talking while Putin drinks a glass of water, and it gave the Russian military a chance to trot out its heavy hardware. Don't be alarmed. Putin is still really in charge and he still knows how to keep things from spinning out of control. As for the military demonstration: from my decades of close observation of the mighty Soviet/Russian arsenal in action, I wouldn't be at all surprised to learn that the ballistic missiles and strategic bombers the Russians used on Georgia were actually the ballistic missile that had an operable inertial guidance system and the strategic bomber that managed to get off the runway. At this point, the bomber is no doubt hard down awaiting parts that won't be manufactured for another ten years and the missile either blew up or crashed.

The Russians, like the Chinese, spend around a tenth as much as we do on defense at most, and they aren't looking for a rematch of the first Cold War's arms race. They're perfectly content (and wise enough) to sit on the sidelines and watch us spend ourselves into insolvency arming for wars with foes that only exist in the Star Trek franchise.

I was beginning to think I was the only one who saw an eery parallel to Gulf War I.