LGBT Community Needs to Fracking Chill on Obama and Warren 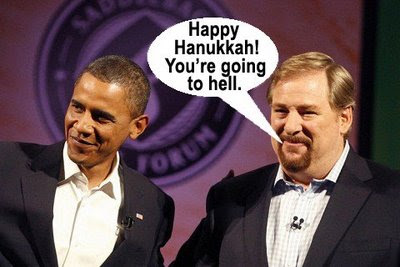 Before arguing here for Obama's choice of Warren's inclusion in the inauguration, let's add that Aravosis found this gem at TNR by Alan Wolfe in which "Rick Warren outright told a Jewish woman, in front of a large gasping crowd, that she was going to hell because she hasn't converted to Christianity." Hey, Happy Hanukkah.

But such idiocies that Warren professes as consigning world Jewry to eternal damnation [or whatever fate in hell awaits our functionally fellow heathens, that's going to be some party] is a good place to begin.

Over the 2008 campaign, I wrote 10,000s of words on Barack Obama since I first heard about the man's candidacy, in any length anyway, from my Georgia-bred-and-raised Irish mother—[a greater foe of racism and bigotry I have not met than she, and I have been fortunate to meet many incredible people].
It's difficult to apprehend the American mind when, for instance, in knocking on 100s of doors on the south side of Milwaukee this summer and engaging charming people, a nice elderly house-bound woman proceeds to tell me that yeah, she's voting Democratic this year, things need changing, but it's just too damn bad the Mexicans and Blacks have "taken over" what in the past were largely Polish-white neighborhoods. [A joke among some political circles in Wisconsin is that the 27th street viaduct crossing I-94 in Milwaukee is the "longest bridge in the world" because it connects Africa (a very Black area) with Mexico (a mixed but quite Mexican and other Hispanic-populated area on the south side). The joke used to be Africa to Poland.] By the way, check out Gare-Bear's bar just on the Africa side: Cool people.
The 2008 race was historic. I felt more personally involved this year than in any race that I have worked in, in any manner. But I knew all through this Fall that some 41 percent (in a best-case scenario) of the vote would still go to the John McCain-Palin ticket and the self-conscious ignorance and bigotry this ugly reality of our political culture represents in the modern Republican Party.
Casting Jews to hell. The state controlling a woman's body. Disenfranchising LGBT folks by denying them equal protection under the law. Massive lies and mass murder (aka war). Jailing millions. Starving millions. Preventing the dreams and happiness of millions. An industrial policy that seemingly aims at restoring feudalism.
This is the reality of contemporary American society sustained by ignorance, isolation and depolicalization consonant with broadcast networks dedicating an untold number of hours on the personal lives of hot, blond woman [nothing wrong with hot, blond women mind you] vis a vis discussions of the continuing wars America is waging over the world to catastrophic results.
If one were to exclude from the inauguration and other official functions the imbecilic Americans who fervently believe that those unperfected Christians, aka Jews, are headed for damnation, then many mainline Christians would find themselves thinking, well, who knows what they think. But 10s of millions of Americans (many of them wonderful human beings not withstanding their array of anti-human sentiments) would be told in a message to get lost: All that Obama unity talk was crap.
But the 43 percent of voting Americans who did vote for McCain, or think that dinosaurs frolicked with early man and that biological evolution is a liberal plot are as American as we are.
So, does Obama who campaigned on unity and a presidency representing all American exclude these American among us who hold idiotic views?
And I don't know about you, but I'm into public policy and not the substance of an inaugural invocation. [My sister Joan, Brucie and my crazy nieces are going to the inauguration, but I doubt seriously that the invocation will stay etched into their minds.]
What is an invocation anyway other a banal, insipid address to an imaginary friend? Warren will intend well and I doubt that he'll use the occasion to cast down spells (prayers, whatever) on gays, Jews, and the rational among us.
Warren's just a guy, a fool to be sure, talking. So, lighten up.
Personally, I do without religion and its artifacts remaining in political ceremony, and the other foolish fare to ill-formulated questions from which the religious-minded among us run without apparently caring what precisely so frightens then.
But hey, people believe what they want to believe and they are our fellow citizens, finally being called by a president to engage in a common effort.
Our president is their president.
So to all of my fellow LGBT civil rights workers and political analysts outraged by the soon-to-be-forgotten address by Rick Warren: Forget about this silly exercise of the invocation, enjoy Obama's address, party down, and then get your asses back to work on public policy
All great religions, in order to escape absurdity, have to admit a dilution of agnosticism. It is only the savage, whether of the African bush or the American gospel tent, who pretends to know the will and intent of God exactly and completely.
- H.L. Mencken, Damn! A Book of Calumny, (1918)
Religious Right, Religion, gay rights, anti-Semitism, AmericaBlog, Rachel Maddow, Barack Obama's presidency, LGBT, Obama's Way Forward, Alan Wolfe, Barack Obama's inauguration, Barack Obama's victory, H.L. Mencken, John Aravosis, Judaism, Rick Warre
0
No votes yet

This is something that needed saying

I realize that our's is a controversial point and I look forward to the discussion.

I disagree with the diarist

I think Rick Warren was an abysmal choice and that choice sends a signal to the progressive community.  IMO there are a lot more appropriate choices for the honor.

I Don't Think He Is Saying Warren Was the Best Choice

I think he is addressing the outrage at the choice. At least that's how I interpret it. I certainly was unpleasantly surprised to learn of the choice but I think I understand why Obama did it, and I don't think it represents a repudication of his commitment to uphold the civil liberties of the gay and lesbian community.

I doesn't have anything

to do with Obama's commitment to anything.  But how would you expect the African American community to respond if Obama had chosen a minister who has a record of making racist statements?

Rick Warren has compared LGBT relaitionships to that of a pedophile who victimizes (an understatement) innocent children.  He supports sexual reorientation programs to cure gays.  These programs are have been shown to be very damaging to the participants, even leading to documented cases of suicide.

What good reason is there for Obama to elevate such a controversial minister?  I honestly can't see one myself and don't accept any of the other ill attempts to explain it either.  This is the second very outspoken bigotted minister Obama has chosen to lead an event.  Obama can't stop biggotry but he doesn't have to hand it a microphone either.

I am not defending the choice but consider this

FDR forged an alliance with Southern Democrats and Democratic City machines in order to win election AND gain control of the House and Senate. And he made many other compromises for what he considered to be necessary political reasons ... not lifting the ban on Jewish immigration, interning the Japanese, and perhaps others that don't come to mind. I am not defending his actions, but consider-- He unequivocally opposed Prop. 8, but it passed, in part because the California black Obama vote favored banning gay marriage.

I don't think you

are defending Obama, more like offering up excuses.  Obama doesn't need to an alliance with evangelicals to be a good president or accomplish anything.  I think his and other Democrats theory that they need to reach out to religious groups like the Republicans have done is wrong.  This is just more pandering and divisive politics.  He was elected with enough of a majority to avoid problems like this.  We would be much better off as a nation if our politicians would set a firm boundary between their elected office and religious groups.  If you want to discuss your religion, fine but beyond that there is no need to involve religion in our government.  I don't want my minister telling me how or for whom I should vote and I could care less about the religion or lack of with my elected officials.  The nation has enough problems at the moment.  These ministers that seek power and influence politically are all to often abusing the power they hold over their members too.  Enough is enough.  We have known politics and religion don't mix for centuries now.