Negotiation Genius: How to Overcome Obstacles and Achieve Brilliant Results at the Bargaining Table and Beyond (A Book Review) 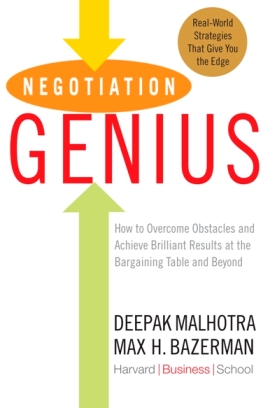 I don’t usually pick up books on negotiation, much less read them cover to cover. As a clinical psychologist, I tend to feel very confident about being able to negotiate interpersonal relationships with my “clinical skills” and the few times I’ve needed to engage in a business type of negotiation (e.g., buying a house) have not inspired me to try to master this particular skill set. In a nutshell, I’ve always felt that books on negotiation were written for someone else. I should have known better, especially since I’ve known the book’s first author for years and have seen his negotiation skills in person.

Deepak Malhotra and I met in the summer of 2001. We were both summer fellows at the then recently founded Solomon Asch Center for Study of Ethnopolitical Conflict, an interdisciplinary institute that was formed to facilitate scholarship on ethnic conflict and inform practitioners in the field. There were 16 of us in all, a group literally gathered from every continent. We spent our mornings learning from the top scholars in the field (flown in for that very purpose), the afternoons discussing the morning’s lecture, and most of the evenings getting to know each other over drinks. What follows is an evening story.

On that particular day, Deepak and I (and another fellow from ) were coming from a previous activity and joining the larger group mid-drink. An hour or so later, the large group had slowly dwindled, with each person leaving cash at the table to cover their part of the bill. We noticed this peripherally but were sufficiently engrossed in our conversation that everyone else was long gone by the time we were finally ready to leave. At this point, we looked at the tab, counted up the money, and discovered that, not including our portion of the tab, we were about $100 short. It seemed obvious to me that the three of us would have to split the extra $100, and I said as much. But Deepak said he wanted to try something first. I knew him well enough by then to know that he wanted to try to negotiate, but what, I remember wondering, could there possibly be to negotiate in this particular case? I’ll return to that shortly.

My reason for picking up Negotiation Genius (published by Random House in 2007) was entirely personal: To be perfectly honest, I just wanted to be supportive. I figured I’d read a chapter or two, say something nice to Deepak, and move on. Instead, by the time I was done with the introduction (you can read it online here), I knew I’d be rearranging my schedule so that I could read the whole book as quickly as possible. By the time I was done with the second chapter, I had talked it up so much to my wife (also a clinical psychologist) that we were literally negotiating who would get to read it each evening after we put the kids to bed. Somewhere around chapter 6, I posted on my facebook profile that Negotiation Genius was one of the best two non-fiction books I’ve read in the past 10 years (for the record, Omi and Winant’s Racial Formation in the United States is the other).

Why so much excitement? Well, it is certainly essential that the book’s negotiation framework is carefully thought-out, empirically supported, and beautifully illustrated with real-world examples culled from political history and the authors’ own business consultations and life experiences. And it undoubtedly helps that each chapter is filled with specific negotiation strategies (and common mistakes) that readers can easily apply to a variety of other contexts. But I wouldn’t be half as excited if the contents of the book did not also resonate with my own personal ethics. Malhotra and Bazerman have a chapter on “Confronting Lies and Deception”. It is a brilliant chapter that shows how to eliminate your negotiating partner’s temptation to lie (e.g., signal your ability to obtain information, ask less threatening questions, don’t lie), how to detect when someone is lying (e.g., ask questions that triangulate on the truth, use contingency contracts), and what to do after catching your counterpart in a lie (the answer depends on the circumstances). But what really resonated with me was the authors’ stance about lying: “Don’t do it. Don’t ever lie” they implore (218) – not just because it is often ethically problematic (we can all think of exceptions, and the authors acknowledge these) but because doing so is not worth the costs in gaining maximum value in negotiation. Instead, Malhotra and Bazerman offer a variety of practical alternatives to lying that seem to cover any set of circumstances. By the time you finish reading Negotiation Genius, you'd need to be a pathological liar to not be fully on board with the idea that lying is simply not worth the trouble.

At the end of their book, Malhotra and Bazerman make the argument that the division between what is negotiable and what is not is merely one of perception, that in reality everything is negotiable, though they are careful to point out that this does not mean that everything should be (they have a chapter titled “When Not to Negotiate”). They argue that the principles in their book “are not about buying, selling, crafting deals, reaching agreements, [or] overcoming bias,” but rather are for engaging with other people who “are usually well-intentioned human beings who have different interests and perspectives” (302). For a negotiation genius, they say, applying the ideas in this book during a complex business negotiation is no different than having a social conversation. I’ve never had occasion to observe either author engaged in the former, but that evening at the tavern was a wonderful social example of one of the book’s many negotiating principles.

Having read Negotiation Genius, I now know that what I was thinking was that the other party (the tavern owners/managers) would have no reason to negotiate because they were unlikely to think that negotiation could yield any agreement that would improve the tavern’s BATNA (Best Alternative To Negotiated Agreement). In other words, from the tavern owner’s position, the alternative to some negotiated agreement (i.e., what happens if there is no agreement), is that we pay the extra $100. From their standpoint, negotiating only makes sense if they can improve upon the $100. I didn’t see how we could. Imagine a pie cut into 10 slides, with each slice worth $10. We might, I thought, be able to negotiate, with considerable difficulty, the specific time that we had to hand over each slice (an installment plan), but it seemed obvious that we’d have to part with the entire pie. Since we were not interested in an installment plan, negotiating over the pie slices seemed like a waste of time.

Deepak’s solution was to expand the pie. He called our server over, explained our predicament regarding the extra $100 (probably about $80 of profit to the tavern), and described our (almost) nightly pattern of going out for drinks as a large group. In return for the tavern forgiving the “extra” $100 on our tab (we will happily, he said, pay for our own food and drinks), Deepak offered to bring our group back to this particular tavern several times, which would surely result in several hundreds of dollars more of profit for the tavern. Instead of 10 slices, the pie now had 30 or 40 – each still worth $10. Now by giving us what we wanted (10 slices), the tavern owner would stand to gain 20 or 30, instead of the original 10. By expanding the pie, Deepak created additional value that the tavern owner could only acquire through negotiation, and it was clearly now in his/her best interest to do so. To be sure, we’d have to work out a few details, such as minimizing risk (e.g., that we won’t return as promised) for the tavern owner, but that could be easily accomplished with collateral such as a driver’s license. In just a few short minutes I went from thinking that there was nothing to be gained from negotiating to being convinced that this was an offer the tavern could not refuse. Of course, I was wrong yet again. The server did not feel empowered to engage in this sort of negotiation, and there was no owner or manager on the premises. We did wind up splitting the extra $100 among us, but I recall thinking that watching Deepak in action was well worth the extra 30+ dollars.

But here’s the good news for readers of this review: You can learn from Deepak and his coauthor for a much lower price. The Negotiation Genius book is only $10.20 on Amazon, and for OpEdNews readers there’s an extra bonus. I’ve worked out an agreement with Deepak and Random House for Deepak to post several excerpts from the book there, starting this week. Enjoy the excerpts (they’ll be headlined) and, if you like what you see, consider getting a copy of the book. I’m admittedly biased, but for my money, you couldn’t find a better return on your $10 investment right now, not even if you were a certified negotiation genius.