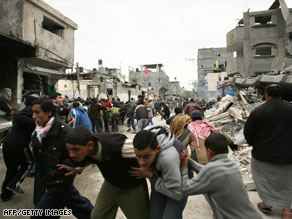 Palestinian civilians run during an Israeli airstrike in the Jabalya refugee camp in Gaza on Monday, CNN News report.

"It's very bad -- people are running in all directions because of the bombings that are happening everywhere," Karen AbuZayd said from Gaza City.

She spoke as Israeli planes fired missiles on Gaza City. Militants in Gaza had fired more than 40 missiles into southern Israel on Monday, killing one person, Israeli police said.

"People are very agitated because the bombings are now concentrating on individual houses and individual families, apparently," AbuZayd said. "So one's never quite sure where it's going to be."

"People are beginning to fight among themselves, and it's just a chaotic time, she said.

This is the third day of that Israeli's having been pounding population dense Gaza, Israeli troops have sealed in the area, creating seige conditions and a looming huminatarian disaster.

Israel, Gaza, Hamas
0
No votes yet

The news about the attacks in Gaza is beyond words. "Appalling" doesn't even come close.

U.S.-supplied Israeli F-16 warplanes and Apache helicopters have fired missiles and dropped over 100 tons of bombs on dozens of locations in the Israeli-occupied Gaza Strip. Over 300 people are dead and at least 1,400 more are injured. Many if not most of them are civilians. Food and medicine were already in short supply in Gaza and all medical facilities have been completely overwhelmed by this onslaught. Access to Gaza has been cut off by Israel.

This is the most violent and heartbreaking situation that has happened to the Palestinians in recent history, and it must stop. In addition to calling for protests at Israeli consulates and federal buildings, as well as letters to the U.S. and Israeli governments, Jewish Voice for Peace staff and members are already putting together an aggressive campaign focused on Gaza. And, without a moment to waste, we call for an immediate end to attacks on all civilians.

I am Stephanie Roth and I've been an activist with Jewish Voice for Peace for many years, including serving on the board of directors. I've been involved with social justice issues my entire adult life - both in my professional life as an editor and fundraiser, and as a volunteer and activist. There is no issue I find more important or compelling than my work to end the Israeli Occupation. I am particularly saddened by this weekend's tragedy, occurring just a week after the uplifting days when the Shministim - the young Israeli conscientious objectors - caught the world's attention with their courage to say no to violence on December 18. I know that people in Gaza will stop dying when Israeli soldiers, like the Shministim, have the courage to say NO. NO, we will not target civilians; NO, we will not follow immoral orders; NO, we will not contribute to the destruction of Palestinian society.

Together with the Shministim, and with the 1,000 Israelis in Tel Aviv and thousands of others around the world who have already come out to protest the Gaza onslaught, we say YES. YES, stepping up to speak for justice and peace makes a difference; YES, we stand with the people of Gaza, of the West Bank, of Sderot in Israel and the innocent civilians everywhere whose lives are destroyed by cynical politicians and warmakers; YES, our voices together are stronger than the voice of any one of us alone; and YES, we are committed to the longterm goal of ending the Occupation and working for justice, peace and life.

Jewish Voice for Peace's goal - MY goal - of ending the Occupation is a long-term one. Today, I will be giving the biggest gift I can to insure that they have the resources for a swift and sustained response to this most recent atrocity.

We are in this struggle for as long as it takes, and we need your help. Please make the largest gift you can, today. Every gift is put right to work, and every gift makes a difference.