Shock and Awe and Flying Submarines 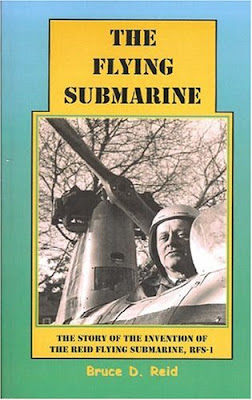 Last spring my dog Shady and I were walking across the bridge over Pleasure House Creek when I heard a disturbance in the water. I looked down and saw a Great Blue Heron breaking the water's surface. The heron flicked the water from its wings, flapped them, and went flying down the creek about two feet above the surface.

Impressive, I thought. Boy, wouldn't the weapons procurement nimrods at the Pentagon like to get their mitts on technology that could do that?

Thus it was that I reacted with both amusement and horror to an email notice I received in October from the Defense Advanced Research Projects Agency (DARPA) offering federal grant money for "a feasibility study and experiments to prove out the possibility of making an aircraft that can maneuver underwater."

In other words, DARPA wants to pay someone to come up with a phony baloney argument that says it's possible to make a flying submarine.

DARPA has a budget of $3 billion. According to the specifications, previous attempts to come up with a flying submarine failed because "the design requirements for a submersible and an aircraft are diametrically opposed."

Yeah, the design requirements for an airplane and a submarine would be diametrically opposed, with $3 billion to spread around, DARPA is sure to find someone who will tell them the requirements are identical. For that kind of money, they can find someone who will tell them it's possible to make a soup sandwich that tastes like filet mignon and will get you forty miles a gallon if you pour it into the gas tank of a Hummer.

Shock and Awe and Gizmos

If the Pentagon is willing to pay some gee wizard $3 freaking billion just to think out loud about a flying submarine, one would anticipate they'd expect the finished product to be able to shoot down an airliner full of evildoers, bomb a Muslim wedding and sink a pirate ship all in the same sortie, but no. It's a proposed new and expensive way to make old and expensive weaponry relevant again.

Actually, the flying submarine concept isn't all that new. The Soviets tried unsuccessfully to develop one during World War II, and yes, one has to wonder how they imagined that a flying submarine might help keep Hitler's tanks from rolling into Moscow. A defense contractor named Donald Reid supposedly built a flying submarine in the 1960s that actually submerged and flew. The U.S. Navy was considering how it might use a flying submarine at around that time, and the 60s TV show Voyage to the Bottom of the Sea featured a flying submarine that would launch from the mother ship Seaview and whisk Admiral Nelson to his favorite go-go bar in Thailand, or something like that.

Time passed. In 2003 DARPA began a feasibility study of an albatross called the "Cormorant," a multi-purpose unmanned aerial vehicle designed to be launched from the Trident missile tubes of Ohio class ballistic missile submarines that were once a cornerstone of the nuclear triad of the Cold War and are now looking for meaningful work. The Cormorant was envisioned to carry either short-range weapons or surveillance equipment.

DARPA calls the latest evolution of its flying submarine the Submersible Aircraft. The specs call for it to have a 1,000-nautical mile combat radius and to "be capable of transporting 8 operators, as well as all of their equipment, with a total cargo weight of 2000 pounds." We can safely assume the "8 operators" aren't expected to be Maryknoll missionaries delivering a ton of King James Bibles to a suburb of Tehran.

The Pentagon must stop its relentless pursuit of Jules Verne gizmology. The flying sub is one of thousands, perhaps tens of thousands of crack pot weapons proposals that, once in the system, reemerge time and again to knock down the low hanging DARPA fruit.

Like nearly all of these humbug arms programs, the flying submarine offers nothing in the way of national security. It's Cub Scouts playing with G.I. Joe doll stuff, the kind of thing Fred and Robert Kagan might have fantasized about as kids when they took baths together: Wouldn’t it be neat-o if we could put a bunch of Navy frogmen wearing tight rubber suits into a flying submarine and shoot it out of a torpedo tube, and then have it fly to, like, Dr. No's secret island where the frogmen swim ashore and hook up with, like, Ursula Andress and her 7 twin sisters?

Like the vast majority of military industrial decoder ring programs, the flying submarine will most likely never come to fruition. It will simply resurface two or three times a decade and gobble up $3 billion here and $5 billion there until pretty soon it's gone through real money that nobody ever notices went missing.

If by some odd chance the flying submarine ever actually materializes, it will cost even more real money to produce and maintain, and it won't carry surveillance equipment or drop short-range ordnance or insert snake eaters into badlands appreciably better than anything we already have that serves those functions.

It won't win the war on terror, or deter a peer military competitor from emerging, or defeat Plan 9 from Outer Space.

It's time to take the flying submarine and parasite weapon legacies like it off life support and let them sink, crash, burn and die of natural causes.

This means that the Pentagon is full of people too old or too young to have been brought up on Thunderbirds and to know that the flying submarine was invented years ago:

It also means that they never had the humanising effect of a crush on Lady Penelope: