While I originally wrote this in January of 2007, concerning the cost of health care to consumers and service provided, it is equally applicable to the savings for the auto industry. And that is not my opinion, that is the opinion of the successful auto industry management. The ones that aren't asking for a bailout. At the time I wrote this in 2007, each vehicle assembled in the United States cost GM $1,525 for health care; those made in Canada cost GM $197. Probably more savings now since this was written nearly two years ago:

In U.S., it's pay more, get less - Universal Health Care

Why is this man smiling? 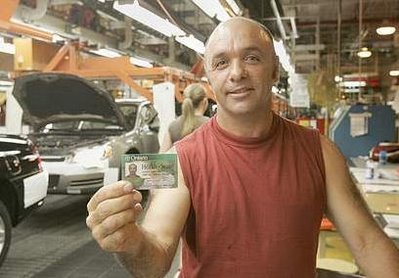 "A RELATIVE BARGAIN: George Mercieca, a worker at a GM assembly plant in Oshawa, Ontario, shows off his Canadian health care card. GM spends an average of $1,385 a year on medical bills for hourly workers in Canada. An American autoworker costs the company about $5,000, but studies show Americans are no healthier than their foreign counterparts."

He is smiling because he has a great job with better medical benefits than most Americans could ever hope for under our failed healthcare for profit system. The kind of job that Connecticut , and the USA as a whole, can never hope to attract under our current system. If you do not believe me than ask youself "what does the manufacturing industry have to say about this?"

While training issues are less of a problem here in Connecticut, because we have a decent educational system, healthcare is cited as a major issue for Toyota's decision to chose Ontario as the location of a new factory for their Rav-4s slated to open in 2008:

"The level of the workforce in general is so high that the training program you need for people, even for people who have not worked in a Toyota plant before, is minimal compared to what you have to go through in the southeastern United States," said Gerry Fedchun, president of the Automotive Parts Manufacturers' Association, whose members will see increased business with the new plant.

Acknowledging it was the "worst-kept secret" throughout Ontario's automotive industry, Toyota confirmed months of speculation Thursday by announcing plans to build a 1,300-worker factory in the southwestern Ontario city.

The plant will produce the RAV-4, dubbed by some as a "mini sport-utility vehicle" that Toyota currently makes only in Japan. It plans to build 100,000 vehicles annually.

The factory will cost $800 million to build, with the federal and provincial governments kicking in $125 million of that to help cover research, training and infrastructure costs.

Several U.S. states were reportedly prepared to offer more than double that amount of subsidy. But Fedchun said much of that extra money would have been eaten away by higher training costs than are necessary for the Woodstock project.

He said Nissan and Honda have encountered difficulties getting new plants up to full production in recent years in Mississippi and Alabama due to an untrained - and often illiterate - workforce. In Alabama, trainers had to use "pictorials" to teach some illiterate workers how to use high-tech plant equipment.

"The educational level and the skill level of the people down there is so much lower than it is in Ontario," Fedchun said.

In addition to lower training costs, Canadian workers are also $4 to $5 cheaper to employ partly thanks to the taxpayer-funded health-care system in Canada, said federal Industry Minister David Emmerson.

"Most people don't think of our health-care system as being a competitive advantage," he said.

It is clearly an advantage for any company that wants to open up a business in any industry... A 4 to 5 dollar per hour advantage. An advantage so great that any state that passes true-single-payer Universal Healthcare first will be positioned to become a mecca for any company considering opening any kind of business.

We already have an educatinal advantage over the most of the USA, having a highly rated school system and a high rate of college graduates. Why the hold up on giving these businesses the real money savings that Universal Healthcare would provide and the other best reason to set up shop in Connecticut?

Because of lobbying from the insurance and pharmaceutical industries. We need to take them out of the loop in the decision making process for this issue since we know they will fight it tooth-and-nail. We need to look at what is best for the people of Connecticut and for all industries, not just those two lobbying behemoths.

And just how much more is healtcare costing us?

Divide the nation's medical bill evenly across the population, and each of us paid $6,102 in 2004, according to the Organization for Economic Cooperation and Development. That's 50 percent more than the residents of the country with the next-highest health care bill, Switzerland ($4,077), and more than double the average for industrialized nations ($2,546).

Those countries provide health care for all their residents for less money than the United State spends while it leaves an estimated 46 million without insurance.

That's contradicted by studies conducted by Gerard Anderson, director of the Center for Hospital Finance and Management at Johns Hopkins School of Public Health. "We have about the same number of MRIs and CT scanners as Canada, the U.K. and France, and far fewer than Japan," Anderson said. "We have the same number of doctors, doctor visits, hospitals and inpatient days at hospitals.

"The difference is we pay two to 2 1/2 times more for virtually identical services."

Even after adjusting for the higher income of U.S. residents, Americans pay on average $2,000 more per year for health care than the residents of the next-highest paying country, Anderson said.

One out of every seven dollars spent today in the United States goes for health care -- a record 15.3 percent of the gross domestic product in 2004, the latest year for which statistics are available. By comparison, Canada spends 9.9 percent of its GDP; Japan spends 8.0 percent.

By 2015, one out of every five dollars spent in the United States will go for health care, according to projections by the Centers for Medicare and Medicaid Services. If those projections hold, the average American's share for medical needs alone will be a staggering $12,320.

For all that money, you would expect Americans to be healthier than their foreign friends. The opposite is true.

Whoa! They are healthier than us, and they pay less? And it is not just a monetary cost:

# The infant mortality rate is higher in the United States than in other industrialized nations. In 2003, seven infants died for every 1,000 live births in the United States -- the worst rate of 19 countries measured by the Organization for Economic Cooperation and Development.

I am thinking that anyone that is really PRO-LIFE, and not just talking about it for political reasons, would have to be shocked by those infant mortality rates. Why aren't they screaming about this issue? If they are really honest about being pro-life than they should be our allies on true Universal Heathcare.

A s for manufacurers, just how much profit margin can healthcare open up for them?

Those vehicles, often parked on the same dealer lot as identical vehicles produced in U.S. plants, have one notable difference: Each vehicle assembled in the United States cost GM $1,525 for health care; those made in Canada cost GM $197.

The higher salaries of Canadian autoworkers offset much of the health care savings for the company, said Jim Cameron, labor relations director for GM Canada. But at the cash-strapped automaker, such a huge health care cost differential is hard to ignore. The difference is primarily a result of Canada's national health care system, in which most medical bills are paid by the government. Most countries have similar systems.

WHAT THE FUCK!!! They get higher wages up there too? And GM still racks up more profits from production up north in Canada then they can down here? How much more of this are you Nutmeggers willing to take?

Can you imagine the shockwave across the nation if a car manufacturer or some other large industry chose to locate in Connecticut over other states or countries... And it could happen.

Do you want to continue to pay more just to get less? Less healthy workers, less money, less jobs, less profit for industry as a whole.

Why not get more? More people that actually have coverage? More healthy workers that are more productive? More savings in healthcare for us and for industry? More manufacturers picking Connecticut as their destination of choice? More smiles on Nutmeggers' faces.

Universal Healthcare is the answer to everyone getting more.

It might be the answer to save US industry.

There is an off the shelf answer sitting there getting dusty. Ask Rep. John Conyers, Rep. Dennis Kucinich and the other cosigners about H.R. 676. It would be a huge step towards helping every industry in this nation become competitive.

If you need to know about a health care plan that can fix many of the problems with our privatized ripoff:

"Expanded & Improved Medicare For All"

"National health insurance is not only the best answer,

it is the only answer to eliminating health disparities."

If you live in CT-05 you may want to know that Rep. Chris Murphy has yet to sign up as a co-sponsor to this bill. Ya think it is time to remind him how important H.R. 676 is to all Americans?

undefined
0
No votes yet

that H.R. 676 sat on the shelf so long that the bill # may have changed... But I am sure Conyers or Kucinich would let us know if we asked nicely.