To be honest, I'm just not sure what to make of this.

I've stumbled across an inconsistent application of casualty definitions within the Department of Defense while researching the Missing Persons Act and how it pertains to civilian contractors working in Iraq.

The Under Secretary of Defense for Personnel and Readiness distributes what's known as an instruction that "provides uniform official casualty terms and definitions." The relevant Department of Defense Instruction (DoDI) is DoDI 1300.18 - "Personnel Casualty Matters, Policies, and Procedures." The most recent version was issued in January 2008.

The instruction provides a chart and definitions used for casualty reporting. So every time some one is injured or killed in Iraq, paperwork is filed. This paperwork in turn sets in motion a variety of actions through different agencies and departments, for instance alerting the Casualty Assistance Center to get in touch with next of kin, etc.

But here's the thing. The status of "Missing," as in missing person, is itself missing from one of the casualty reporting forms.

What is a Casualty?

For the purposes of casualty reporting, personnel are chosen from one of the following:

Each casualty is defined as a combination of a) TYPE, b) STATUS, c) CATEGORY.

Here's where it starts to get interesting...

In addition, definitions within DoD Instructions include 2 additional statuses:

At the DoD Component’s discretion, an additional casualty status of Special Patient (SPECPAT) or Special Category (SPECAT) may be used - both are injury or illness related.

For status "Missing" only, CATEGORY:

DoDI 1300.18 provides a chart of on page 38 for determining just what kind of casualty to report. The chart is accompanied by the following text:


Use the chart below when completing blocks 4a (TYPE), 4b (STATUS), and 4c (CATEGORY). Only these combinations are authorized. Definitions are contained in Enclosure 2. [...] The word Pending can only be used on Initial or Interim reports. 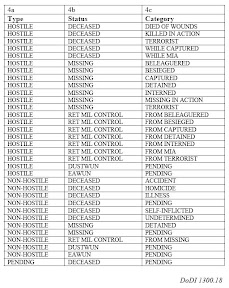 Problem is, the chart doesn't match the information in the actual "Definitions" within DoDI 1300.18. For instance, while "Terrorism" is defined, "Terrorist" as a Category is undefined so it's impossible to know when it's appropriate to use it. Some of the Status options, such as VSI, are not listed on the chart at all.

And if you're researching Missing Persons, as I am, the first thing to jump out is Hostile-Missing-Missing is itself missing from the chart even though "Missing" as a category is used further down under "NonHostile-Ret Mil Control-Missing."

Perhaps more disturbing, "Missing" is missing from a form known as the Casualty Feeder Card (DA Form 1156). Casualty Feeder Cards are one of the first pieces of paperwork generated in the casualty reporting process. The data collected on the card is fed into the Defense Casualty Information Processing System (DCIPS). The DCIPS system then generates a "Report of Casualty" known as DD Form 1300. Without DD Form 1300, a casualty just doesn't exist. 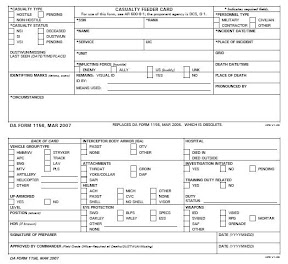 Look closely at the form above.

The form does include "Civilians" and "Contractors" under the options for "Personnel Type." But there is no option for either "Missing" or "EAWUN" excused absence – whereabouts unknown for civilians under "Status." In fact, the form as it currently exists makes it impossible to report a missing civilian or contractor. The only option available is "Pending."

And that bodes ill for recovering missing persons.

Susie Dow is the author of a recent article at ePluribus Media, Missing Contractor: US Military Mechanics may Hold the Keys in addition to One Missing, One Dead: An Iraq Contractor in the Fog of War, and Iraq, Contingency Contracting & the Defense Base Act: I-III. Dow is the Editor of the weblog, The Missing Man, which follows articles on Kirk von Ackermann and his colleague Ryan Manelick. She is a volunteer researcher and editor at ePluribus Media.

Iraq, contractors, missing
0
No votes yet