Another hole in the ACORN story by GOP juvenile delinquents?

Another one of their videos has another hole shot in it by the police? The AP is reporting that Vera did call the cops on these two GOP juvenile delinquents:

Police say a worker with the activist group ACORN who was caught on video giving advice about human smuggling to a couple posing as a pimp and a prostitute had reported the incident to authorities.

Police have confirmed that Vera reported it to them. That means two of their videos have been proven as being nothing more than successful at harrassing ACORN workers.

First there was the lady who told them she murdered her husband to yank their stupid, and now reports that a second worker has said they contacted the police.

There are other offices that reported these two juvenile delinquents to the police, but you won't see James O'keefe or FOX noise reporting that fact, will you?

Ya think it is safe to say that all James O'Keefe and his FOX noise accomplices have accomplished is to harass a lot of ACORN employees? Wonder what kind of case these workers will have in court? Vera might have a case against ACORN for wrongful termination and certainly against O'Keefe and FOX noise for defamation of character and, likely, all kinds of other mean and nasty stuff. Never mind the trouble these GOP punks may be in for illegally taping ACORN employees in Maryland.

These two kids are starting to look like very typical poster children for the modern day GOP: Incompetent and criminal in their actions.

Any guesses on when FOX will report on the journalistic fraud their network committed? 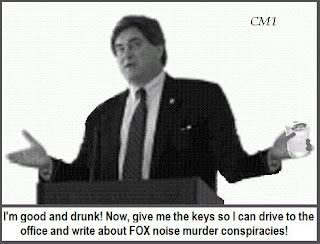 Seriously, Healy, is this really a great way for you to to continue to go through life?

"Let this be a warning to those who think they can roll the
American people and get away it. Exhibit A is the quick destruction of
ACORN - Association of Community Organizations for Reform Now - after
several videos showed their members setting up prostitution ring and one member bragging how she shot her husband dead without anyone knowing about it - until she told the tale on tape."

If the pitiful head Connecticut Republican mobile liquor
sponge would turn off Glen Beck and the FOX noise for a few minutes he
might begin to realize how much of a joke he really is.

I can't do anything about your being fat and drunk, Healy, but here is some Kryptonite for your stupid:

When the actors approached Ms. Kaelke with their
provocative costuming and outlandish scenario, she could not take them
seriously. So she met their outrageousness with her own personal style
of outrageousness. She matched their false scenario with her own false
scenarios.

“They were not believable”, said Ms. Kaelke of the two actors.
“Somewhat entertaining, but they weren’t even good actors. I didn’t
know what to make of them. They were clearly playing with me. I decided
to shock them as much as they were shocking me. Like Stephan Colbert
does – saying the most outrageous things with a straight face.” While
her sense of humor might not be funny to many people, the fact is that
she spun false scenario after false scenario and the videographer ate
them up.

For example, in response to the set-up by the filmmakers in which they
say they are trying get the young woman away from her abusive pimp, she
responds that she was abused by her former husband as well (true) and
that she shot and killed him (false). He is very much alive and living
near Barstow, CA.

However, this is taken as the gospel truth, not just in the film
itself, but also by several “news” personalities, indicating that no
journalistic standards were applied to making the video or vetting it
for broadcast.

And here’s a report from the San Bernadino police department:

An undercover video reportedly filmed in the San Bernardino
office for the Association of Community Organizations for Reform Now
(ACORN) was recently released on the Internet. The film depicts a
worker talking about her past involvement in prostitution and the
alleged self- defense killing of her former husband.

The San Bernardino Police Department is investigating the claims made regarding

the homicide. From the initial investigation conducted, the claims do
not appear to be factual. Investigators have been in contact with the
involved party’s known former husbands, who are alive and well.

Of course when the video popped, righties didn’t apply their b.s.-filters and like when Cheney said Iraq would greet us as liberators, just assumed all was as it appeared.

Healy is, still, clearly "Fat, drunk and stupid"  if he thinks anyone is buying the Republican snake oil he sells.

"I heard that too" - Karl Rove while committing treason...