Felice Gelman
I am a member of the Wespac Middle East Committee and part of a group of four delegations under the umbrella of CODEPINK invited to Gaza by the UN Relief and Works Agency. This trip is a follow-on to a March CODEPINK Gaza trip which I participated in

The first morning in Gaza, we returned from Gaza City to Rafah to spend time at the Lifemakers Center – the children’s center Fida Qishta and her sister Faten founded. Our drivers took the coastal road – a real treat. Absolutely no traffic, beautiful seascapes most of the way. Even here, however, there was plenty of evidence of destruction… the occasional large home destroyed, factories, workshops, and farm buildings flattened. Also, near Deir Balah, you cross a bridge over Gaza’s open sewer (the parts for the sewage treatment plant have been held at the border forever). Raw sewage must be pumped untreated into the sea, polluting all the coastal waters.

The sea was completely void of fishing boats, and we could see why. On the far horizon, the roostertail of a patrolling Israeli navy boat. The fishermen have been saying that the shooting is worse now than it was during the Israeli invasion in January.

Rafah is crowded and poor, without the newer apartment construction that Gaza City saw post 2000 in preparation for self-rule. The Lifemakers Center is in a small building, 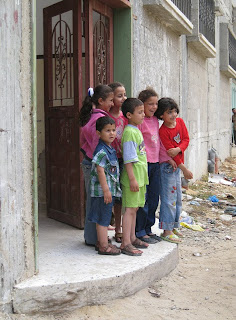 and is very basic, but it was a joy to watch the teaching. It serves children from about 6 to 16, teaching them English and math. Formally it is open three days a week, but practically some children are there every day. Tuition is $1/month if the parents can afford it.

Only one of the three classrooms was in use while we were there because this is the exam period for schoolchildren. The children at the center were working on practicing their English letters and spelling by playing guessing games. Then they all introduced themselves and answered some questions in English. The classroom was packed with children 7-12 years old who were, remarkably, able to concentrate and maintain order for almost an hour. That was the achievement of skilled teachers. We had a little chaos after that with all the children vying to use the classroom camera to take pictures with us. 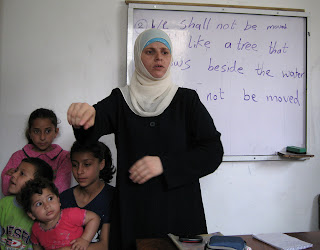 We taught them to sing We Shall Not Be Moved. Again, the teachers explained to them what it meant, and in less than five minutes, they were singing it mostly by themselves.

After the singing, we asked the children to go around and tell us what they wanted to be. Every answer was ambitious but practical --- doctor, surgeon, civil engineer, teacher, etc. I thought about Omar Hallak, a Palestinian who grew up in the refugee camps in Lebanon, and is on the big CODEPINK delegation. He said when he told his father he wanted to be an astronaut, his father told him --- Don’t dream. You are a Palestinian. You can’t be an astronaut.


Rafah is a very traditional, conservative city and two of the teachers wore niqab (a face veil). Our group had a very interesting discussion about this afterward because I don’t think any of us ever had an opportunity to interact with a fully veiled woman. I cant say we reached any consensus opinion, but many preconceptions were challenged. What impressed me was how quickly it was possible to see through the garb to the human being, her intellect, teaching skills, and warmth towards the children.

The Lifemakers Center is just one example of a Palestinian civil society that Israeli attacks have just not been able to erase. Throughout Palestine there are strong communities where people believe deeply that they can and must maintain and develop their society -- done through voluntary associations that operate on less than a shoestring.

This is today's news from Gaza -- hat tip Buzzflash

www.imemc.org/article/58229
sent by nasrudin since 5 hours 9 minutes
An international humanitarian aid boat filled with medical supplies and surgeons has been attacked by the Israeli navy. According to the Free Gaza movement, the boat called The Dignity has been rammed by an Israeli gunship, and live rounds were fired around the boat, as of 6:45 am Tuesday morning. The group's media spokesperson said that she had been in contact with the passengers on the boat, which include a former US Congressmember [Cynthia McKinney] and a Cyprian Member of Parliament, but just before cell phone contact was cut off, heavy gunfire was heard in the background. No one had been injured at the time, but since contact was cut off with the boat, it's unknown whether anyone has been injured. In a press release, the Free Gaza movement stated, “Contrary to international maritime law, the Israelis are actively preventing the Dignity from approaching Gaza or finding safe haven in either Egypt or Lebanon. Instead, the Israeli navy is demanding that the Dignity return to Cyprus - despite the fact that the ship does not carry enough fuel to do so.”