A Detailed Account of the Impact of Israel's Attack

Our meeting with the Palestinian Center for Human Rights is the best orientation to the impact of the Israeli attack. PCHR meticulously documents everything, and deals quite fearlessly with both internal and external violations of human rights.

PCHR estimates that, during the Israeli attacks, 2,500 tons of explosives were dropped on Gaza. That equals 3 kilos of explosives per meter. (They have a massive display of weapons fragments in their office, with all too many bearing indications that they were made in the USA). 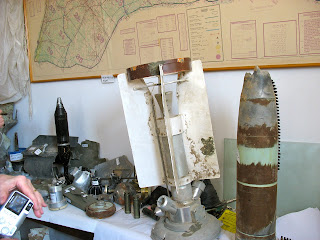 The hostilities began during the change between the morning and afternoon shifts in Gazan schools. That means that more than 500,000 students were in the streets when the bombs began to fall.

The bombing targeted the civilian infrastructure of Gaza – Al Quds hospital was bombed with white phosphorus, 4 schools were bombed, 5 kindergartens were bombed, the Ministry of Finance, and Ministry of Ex-Prisoners [of Israel] were bombed. Virtually every police station and many fire stations were demolished. The central police station and police academy were bombed just as the most recent graduating class were receiving their diplomas. 200+ new policemen were killed here alone. The Parliament building was destroyed. The industrial zones of Khan Yunis and Al Foukheiry were flatted – first by bombs, then with D-9 bulldozers (sold to Israel by Caterpillar). Some of UNRWA’s shelters for refugees were bombed. The vast majority of those killed were unarmed. Israel targeted police stations as part of “the infrastructure of terror” despite the fact that, under the Oslo agreements, police are explicitly identified as civilians.

There has been no change since March, when I was in Gaza last, in the availability of construction materials. Nothing is coming through the border crossings, and what comes through the tunnels is way to expensive for any extensive reconstruction. The government has begun, in a few places to remove rubble, but very little heavy equipment is functioning. A lot was destroyed by the Israelis during the invasion. 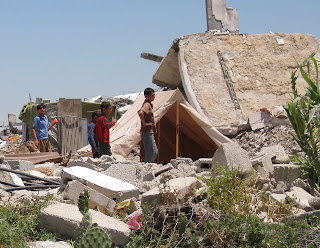 PCHR estimates that 55,000 people remain homeless from the most recent Israeli invasion and another 20,000 are still waiting for the government to help them reconstruct homes demolished in previous incursions and the occupation. Certainly our trip organizer, Faten Qishta, is a case in point. Her family’s home in southern Rafah, near the border, was demolished by the Israelis in 2004. The entire family worked nonstop until they were able to get enough money to build a new, smaller home elsewhere in Rafah. However, they still are waiting for the assistance they are owed by the government to rebuild their demolished home. When they finally get it, they will build a second house so that Faten’s brother can marry. The enormous destruction of homes, in addition to all the other misery it brings, has delayed many marriages because there is no place for a new couple to live. `

The borders have also effectively have been closed for patients needing any advanced medical care. I spoke to my friend Douhaa, a doctor at Shifa hospital, who told me that, before the siege, standard cardiac operations like implanting stents were available in Gaza to patients. Now, however, the equipment cannot be maintained and the medical supplies are unavailable, so patients needing cardiac stents are sent to Egypt. Once they arrive in Egypt, they wait up to four weeks for treatment. This makes it highly likely that a cardiac blockage will deteriorate into a complete stoppage and the patient will die while awaiting treatment. But the chances are the patient will never be allowed into Egypt at all. Less than 15% of the patients in Gaza that the World Health Organization estimates would need treatment were allowed into Egypt last month. Care for renal failure faces exactly the same problems. Gaza has plenty of qualified doctors. They just have no equipment. Medical equipment like portable x-ray machines has been held at the border for almost a year. Gaza is also very short of supplies to treat malnutrition, while the incidence of malnutrition is increasing with the intensification of the siege.

Before the border closures, 9,000 separate items were imported into Gaza. Now, the “easing” of the siege has increased the number imported from 9 to 40.

PCHR is now preparing a legal fight against the siege. They have dozens of volunteers working with them, both in Europe and the US, using the extensive documentation they have developed on patients being denied care, students denied scholarships and education abroad, and people denied work. In September 2005, The Palestinian Authority and Israel signed a Terminals Agreement that codified how the border should operate and established a European monitoring group to report on its effectiveness. After 5 months of handling 450 incoming shipments/day and 500 outgoing shipments/day with positive reports from the European monitors, Israel abrogated the agreement and destroyed the monitoring system.