Meet me at the corner of RNC and Grassroots Fail

1. A group of prominent Republican strategists have combined to form American Crossroads, a 527 committee that is aiming to spend upwards of $50 million on House and Senate races this fall.

"We intend to paint a very vivid picture of the fork in the road that this country faces -- not merely a choice between two candidates, but a serious philosophical decision about the future of this country," said Jim Dyke, a former Republican National Committee communications director and now a member of American Crossroads' board of directors.

Dyke is joined by former RNC chairman Mike Duncan and vice chair Jo Ann Davidson on the board while Steven Law, a former executive director at the National Republican Senatorial Committee, will serve as president and CEO. Former Republican National Committee chairman Ed Gillespie and former White House deputy chief of staff Karl Rove are serving as informal advisers to the group as well. Dyke added that the group is currently hiring operatives with state-specific campaign knowledge to bolster the operation.

(It should be lost on no one that the past senior leadership of the RNC is involved in the effort even as current RNC Chairman Michael Steele continues to battle through a series of public relations hiccups.)

Just a quick visual reminder of one of the reasons why Steele is having a hard time fundraising at the RNC: 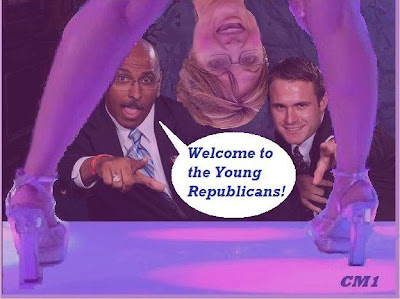 Unfortunately for those organizing, plotting and meeting at the "American Crossroads" RNC Shadow Group and according to Think Progress, they are getting run over by some pretty harsh realities:

The “shadow RNC” consists of organizations like American Crossroads, a 527 to run campaign ads and the American Action Forum, a Wall Street-funded clearinghouse for pro-corporate ads and events. While Gillespie promised to raise $50 million dollars for his new venture, the Politico points to disclosures which reveal a far more modest haul:

The group, American Crossroads, raised only $200 last month, according to a report it filed Monday with the Internal Revenue Service, bringing its total raised since launching in March to a little more than $1.25 million. [...] Trevor Rees-Jones, president of Chief Oil and Gas, a privately held energy company in Dallas, in April contributed $1 million to American Crossroads while B. Wayne Hughes of Lexington, Ky., the chairman of Public Storage, contributed $250,000 in March.

In sum, outside of two large checks, American Crossroads has failed to attract any widespread support so far. While the low fundraising numbers may lead some critics to discount Rove and Gillespie, both have many connections to deep-pocketed donors. Gillespie has been meeting with financial executives, and Rove has recruited a top official from the U.S. Chamber of Commerce to assist with his efforts. On the other hand, the right-wing establishment promised in 2008 to press forward with a similar attack network, called Freedom’s Watch, which eventually dissolved despite months of similar hype.

My only question? How long before one of the Koch brothers dumps a ton of money into "American Crossroads" in order to create another grassroot corporate Astro-Turf movement? Because they obviously need one with fundraising like that. Seriously? Only 200 buck$ last month???

Have a Koch and a smile

TPM pushed this one up to the traditional media and Maddow kicks it up a notch:

Visit msnbc.com for breaking news, world news, and news about the economy

TPMmuckraker's story yesterday about Koch Industries preemptively alerting the press that the mega-company does not fund tea parties -- despite the fact that it backs one of the major tea party groups -- got the Rachel Maddow treatment last night.

But for all we know... Either or both of the Koch brothers may already be involved in one of the new overlapping "grassroots" groups being started up with the heavy investment of rich Republicans and corporations in order to join their old AstroTurf:

The Republican Party’s best-connected political operatives have quietly built a massive fundraising, organizing and advertising machine based on the model assembled by Democrats early in the decade, and with the same ambitious goal — to recapture Congress and the White House.

The new groups could give Republicans and their allies a powerful campaign apparatus separate from the Republican National Committee. Karl Rove, political architect of the Bush presidency, and Ed Gillespie, former Republican Party chairman, are the most prominent forces behind what is, in effect, a network of five overlapping groups, three of which were started in the past few months.

And you can be pretty sure of this fact... This is a really big overlapping conglomerate and its goals are to try and channel disorganized right wing angst and chaos at being out of power AND probably just as much aimed at keeping the real right wing grassroots funneling their money in to the efforts of putting republicans back into power even though many of those in the Tea Party have clearly had it with the GOP, as well:

American Crossroads isn't alone. February saw the launch of the American Action Network, spurred to life by GOP fund-raiser Fred Malek. Modeled on the liberal Center for American Progress, backed by Haley Barbour and Jeb Bush and headed up by former Sen. Norm Coleman, it's a self-described "action tank." Its policy arm, run by Douglas Holtz-Eakin, will shape conservative ideas and serve as a message shop for GOP candidates.

Mr. Gillespie last year teamed up with GOP pollster Whit Ayres to create Resurgent Republic. It's a mirror of Democracy Corps, created in 1999 by James Carville and pollster Stan Greenberg to produce opinion research and analysis for Democratic candidates. And in January Mr. Gillespie took over the Republican State Leadership Committee, which exists to elect Republicans at the state level. The goal is to double fund raising to $40 million, to win key legislatures and governorships, and to position the party to take maximum advantage of the redistricting that follows this year's census.

His coalition is raising $11 million for midterms, and its goal is to register one million new voters in 2010 and 2012. It's also positioning as an organizational outlet for grass-roots fervor coming out of the tea party movement. "We're a resource for folks who are looking for a way to not just express their frustration, but to get involved with shoe-leather politics," says Mr. Reed.

Groups like American Crossroads were set up to supplement, not replace, the party organization, and few are happy with the RNC mess. Also notable is that most were formed out of the conviction that Republicans have a real challenge ahead of them. "People aren't reckoning with just how much work and investment it is going to take to break the Democratic monopoly in Washington," says Mr. Law. "There's a giddiness out there that is misplaced." Just how serious Republicans are at harnessing these new third-party efforts will become clear in November.

You have to figure that if the GOP throws enough fake AstroTurf out there, some of the disgruntled former GOP supporters that don't want to give them a dime may just accidentally toss some money to the GOP... And never even realize it.

Because many of those Tea Partiy people really don't give a crap about the GOP anymore and would just as likely Teabag them if they could:

The Right will abandon the Republican Party if it has an alternative: The Rasmussen poll numbers prove that what happened in New York's 23rd congressional district was no "fluke," says Peter Suderman in Reason. Third-party Conservatives elsewhere might push aside GOP candidates the way Doug Hoffman did in NY-23. The energy on the Right is not with Republicans, but with "dissident limited-government" Tea Partiers who are fed up "with a GOP they no longer trust."
"More Americans willing to vote for nonexistent third party than GOP"

This is the sort of thing I like, to stay informed with efforts of the behind-the-scenes operators. It's usually not until election-time that I have the chance to get caught up. So, thanks, this is very useful :-)