With the recent changes to the site I just wanted to point out a widget on the right sidebar that Roxy added featuring books written by ePluribus Media members.

The widget should be over there >>> and down a bit.

Any other Blogger books you would like to recommend? Below the fold I'll pull out an old plug I wrote for a book that both my daughter and myself enjoyed, The Pains, by John Sundman at the Wetmachine. Bear in mind that the post was not just about a book but, also, about supporting Bloggers in general.

Stimulate the Economy and Your Brain!

Every once in a while I am going to put up a link here and there to some Blogging friends (well, I think of them as friends? They link, they read and comment occasionally - as do I at their Blogging homes) that have put some serious effort into the causes many of us support and that have something like a book, some art, or maybe something to support a cause dear to their hearts for sale. I don't think it will be more than once a week, give or take, because I don't want to alienate my 3 regular readers (Me, myself and I).

In all of those cases, I think that it makes them worthy of our support. I get absolutely nothing from them for these little blurbs - except, maybe, an "attaboy" and the satisfaction of knowing that the few people that click through here may learn about a new site or a new author/artist/cause.

I figured that I would start with this book, The Pains, written by John and available for pre-order over at The Wetmachine, and since my verbosity is generally limited to and usually starts and ends questionably with 4 letter words ("What the fuck?"), I'll let John's words try and sell you on it: 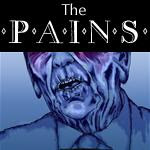 Let's say you're the Savior, Fred Christ. Would you want your frozen head to be reanimated in 1984?

The book will be going to press in November, 2008, and printed books will be in hand sometime in early-to-mid December, 2008.

This book is way off schedule. Sometimes stuff happens, and since I announced The Pains, stuff has happened in giant bucketsfull. However, the book essentially done. Originally I promised it for Summer, 2006, then I said March 2007. Thank you to those of you who have waited, (sometimes patiently, sometimes not so patiently) and encouraged me to finish writing the book. Well, I have finished. Selah. I hope you like it.

Starting with Chapter 3, attentive readers may notice some allusions to, and borrowing from, the work of the late Chis McKinstry, creator of the Mindpixel project. As far as I've been able to determine, there is no copyright holder. I'll have more to say about this when the final book is prepared for publication, but for now I just want to make this acknowledgment.

I have made fair-use use of songs by Kate Bush, Leonard Cohen and Social Distortion, and I have borrowed themes, characters, and even a bit of prose here and there from George Orwell's 1984. Proper attribution will be given in the printed version.

I hope that if you like the book, you'll buy a printed copy or make a donation using Paypal. Cheeseburger and I could really use the money. Really.

This little story is dedicated to the memory of my late brother Paul Damien Sundman and of my late sister Maureen Sundman Angevine. I know that Paul liked the early chapters, and I think he would have liked the finished book. Maureen probably would have hated it--she didn't approve of blasphemy. But I like to think she's in heaven now, putting in a good word for me on the grounds that I'm too stupid to know any better.

You can even get a peek at the book's contents:


Here comes "The Pains," by me, John Damien Sundman, with illustrations by Cheeseburger Brown. The HTML version is [here]; the PDF version that will be used to create the printed book will be along soon. Feel free to read, save, print, copy and share among your friends.

So you can decide for yourself. A couple of other books by John - Acts of the Apostles, and Cheap Complex Devices - are there to take a look at, as well. Also, I encourage you to poke around the Wetmachine site just to get a better idea of where John and his Blogging friends are coming from and going to. And you may just like the Blog... I do.

I believe that when you support a fellow Blogger you are supporting everything you are fighting for.

Now... Speaking of "Support the Blog":

Periodically, we are forced to haul out the old Lemonade Stand.

While ePluribus Media strives to be self supporting with ads, we are barely covering the server bill with our ad income. That leaves other expenses out of reach unless we can go to the community for support.

We need to raise some dollars for fees for FOIA requests, reprint permissions, photos and graphics for our Journal stories.  In other words, we need cash to keep the servers humming, the backups running, and the lights on.

If you don't have funds, click on those blogad thingies.  Each click gives us a few pennies and they do add up.  Our operating costs are pretty low and currently every cent of donations goes to server rental, FOIA requests and other fees.  There is not one person involved in ePluribus Media who receives any money for services.

Whatever you do, thanks for all your support!

Like the other authors, Bloggers, researchers and Blog code geeks that keep ePluribus media going, I do not get paid to Blog here (nor at any other Blog, to be honest) BUT...

As a matter of FULL DISCLOSURE:

At the time that I wrote that plug for The Pains I could not afford to buy the book and John Sundman mailed me a signed copy of the book at his own expense. It sits on a bookshelf within eyesight of my computer as a reminder that we can always do more to help each other help ourselves. And it is the only free thing I ever got as a result of Blogging even though I have turned down offers of "STUFF" (clothing, electronics, services and even money, etc.) in exchange for advertising or links.


h/t to Buzzflash for this:

Washington, DC — BP’s official response plan for oil spills in the Gulf of Mexico is studded with patently inaccurate and inapplicable information but was nonetheless approved by the federal government, according to Public Employees for Environmental Responsibility (PEER). Most notably, the response plan contains no information about how to cope with a deep water blowout but is littered with outright inanities, suggesting that no regulator seriously read it.