Smoking Out The "Glenn Beck For President" Lobby

Maybe? I am not saying for certain that she is fronting another in a long line of AstroTurf groups for the GOP and corporate interests... But take a look and decide for yourself. For all I know, she may just be as crazy as her movement and video implies?

First, and via Gawker, we get this little bit of giggle:

Most Americans want Glenn Beck to be our next president and return us to prosperity. The only hiccup? Getting him to run! Fortunately, the clown lady in this video is circulating a petition to change all that.

Her name is Robin Potwora, and the website for her "grassroots organization," Main Street Bites Back, features a number of terrifying robot-voiced videos of illustrated political figures, including the hated Barack Obama.

Aside from this "grassroots" clown gig? Well, given the Torrington, Connecticut address on "Main Street Bites Back" contact page and the name to go with it... I think it is safe to say that she may just be tied to some  very right wing and typical "grasstroots" lobbying money...

The Tobacco Industry to be precise: 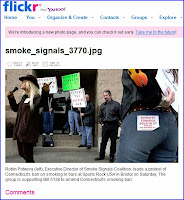 Curious about the "Smoke Signals Coalition"? I pulled this out of a cache:

Rep. Leonard Greene, R-Beacon Falls, wants to repeal the statewide ban of smoking in restaurants and bars a year after identical legislation died in the General Assembly.
But this time Greene has help from a powerful ally.

Tobacco giant RJ Reynolds has bankrolled a Torrington nonprofit with $10,000 to run radio spots in Hartford, New London, New Haven and Fairfield counties and to pay for direct mailing to every liquor license holder in the state to mobilize support for Greene's bill, said Robin Potwora, executive director of the nonprofit, Smoke Signals Coalition.

"There are more than half a million adult smokers in Connecticut. They understand this is a fairness issue," Potwora said of the statewide ban that outlawed smoking in restaurants in October 2003 and in bars in April 2004, but allows it in private clubs and Connecticut's two gambling casinos.

The 30-second and 60-second advertisements, running on a classic rock station in Brookfield, a hard-rock station in Hartford and country music station in New London, ask Connecticut smokers to boycott buying cigarettes until the smoking ban is repealed.

Just thought you might find this typically funny of nearly every "grassroots" GOP Inc. campaign - like the Dick Armey GOP inc. sponsored side of the Tea party. Typical of these corporate astroturf types, she was anti cigarette taxes too. (I'm shocked, I tell you!)

Anyways... There is smoke. Dare I say fire?

[update] Put this in your pipe and smoke it:

He called tobacco “the sleaziest, slimiest, most devious industry in the world,” whose members “also are the smartest and the richest," and then added. "...that’s a bad combination.”*

The biggest scandal in Washington was the Republican Senate selling out to the tobacco industry.

Always prescient, Koop was drawing attention to a coup d'etat: a bloodless takeover of government by big business...one that would drastically effect us for over a decade and is still derailing healthcare reform efforts today.

Koop warned, "We have lost control of medicine to the business world."