Research 2000 just pretty much confirmed the state of the Connecticut Senate race between Blumenthal and McMahon:

It'd been a while since we polled Connecticut, and quite frankly, I didn't expect to ever come back to this Senate race (the governor's race is another story, and a race for another day to poll).

These numbers are pretty darn close to where Quinnipiac had them yesterday:

I blogged about that Vietnam issue being a pile of hooey, having been planted in the media by McMahon and hopelessly being flung around like poop in the right wing blogosphere and media in a desperate attempt to make a non-story into anything they can over at Connecticut Political Reporter. Probably because the joke of a corporatist media would really love to turn this smackdown of a Senate race into a horse race that they want and need to sell papers:

Despite "supposedly" putting his own foot in his mouth last week, Dick Blumenthal still manages to put a good old fashioned WWE Smackdown on Linda McMahon, where Blumenthal keeps a formidable lead, 56-31, over McMahon in the most recent Quinnipiac polling.

Proving that this was the non-story that it really should have been from the start, regardless of the GOP's McMahon planting it, the NY Times doing a bang up job of corporatist stenography for the GOP and right wing Bloggers desperately trying to make more of it than was ever going to be worth.

When McMahon tries to float one we will flush it...

In the media you will find that they repeat the same thing about this story yet is a taken from a video that is purposely taken out of context by McMahon and the media can't even bother to fact check it a bit before they go with it....

Joke 2. (And this is a long running joke)

Rasmussen does its nuttiest best to give the right wing something to latch onto:

What planet are they polling likely voters on? Is there some hidden Republican Connecticut on a propaganda producing Perelandra that we don't know about?

This is expected of Rasmussen as they are purely a propaganda arm of the GOP and they always produce polls that are so far out of whack with reality for months leading up to primaries and elections, which the corporate media slurps up like a Jeff Gannon kneeling in front of George W Bush passing this disease (and others) off to readers as "news",  and then suddenly, magically, weeks before an election their numbers start to reflect the real numbers of a race.

Rasmussen followed their typical propaganda pattern when they were constatntly predicting that there would be a "President McCain" coupled with a "GOP gaining in the House"... Right up until a few weeks before the election when it became clear they would be so far out of touch with reality at the end of it. And it is like they don't think people will notice this?

So in the early months of 2008, the gap between Rasmussen and everybody else was 5.6% compared with 2% late in the cycle. Another important point here is that early in the cycle, Rasmussen's polling accounted for a far larger share of overall polling, meaning that their results played a more important role in shaping horse race narratives in the early stages of the campaign than they did in the latter stages of the campaign.

They are clearly trying to drive a republican narrative and it shows. Some earlier Rasmussen jokes being compiled by Nate Silver:

Here are the results of statewide polling in the 2000 Presidential Election. Although the pollster ratings will eventually involve some fancier math, the numbers you see below are as simple as it gets: I've simply looked at the average error of the last poll issued by each pollster in each state in terms of projecting the margin between Bush and Gore. (A cut-off is established 21 days prior to the election.)

While 2000 was generally a fairly rough year for pollsters, who had to deal with an unenthusiastic electorate, some third-party challengers, and some late-breaking developments like Bush's DUI charge, Rasmussen was the worst of the lot, missing by an average of 5.7 points. They also called 7 states wrong.** Some of this was the result of bias, as they were 3.5 points too high on Bush's margin in the states they surveyed, on average.

If I were a betting man, and I am not, I could see setting up a pool picking the date when Rasmussen starts to reflect reality in the CT-SEN race OR any other race for that matter. They really are that predictable.

An old empty bottle brewed in New Milford showing how out of touch Rasmussen was (looks like pure propaganda to me) during the healthcare reform debate. Just look at the pic to see clearly how out of whack their numbers are:

All you need to know about healthcare polls:

The right wing keeps trying to push a Rasmussen poll with bad numbers in it for Obama, the public option and for single payer. I dealt with the single payer numbers and public option numbers a little bit (and other interesting things, to me, at least?) at ePluribus Media a couple of days ago and most of the Blogosphere has seen the numbers for Obama start to rise again. Much of these numbers have all been noted to follow the start of of pressure from teabagging. Briefly numbers across the board dropped... But as people began to realize all of the things the birthers/.deathers/teabaggers were saying were as crazy as the things many of them were doing the numbers for those issues and Obama re-solidified. While pollster.com dealt with many of the numbers in a different way, I just want to show you the picture they put together of what I am talking about: 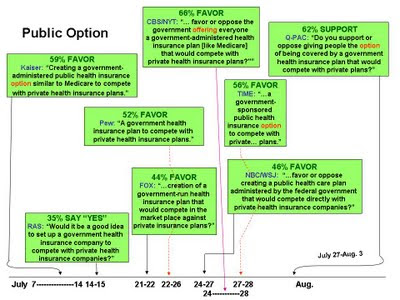 Yes, this one picture deals with the public option but is easily applicable across the board on almost any issue. And I am not even going to get in to the well known right wing bias of Rasmussen, nor their incredibly ridiculous outlier numbers in previous polls. Just remember that they are the one polling outfit that was predicting major leads for the GOP House early into the last election cycle and have, over time, taken a serious beating from many poll savvy people over many of their crazy outliers and polls bordering on the edge of push polls.

Anyways... Some in the media and the right wing are ignoring recent polls and quoting old stuff and even taking stuff out way out of context in order to fit their talking points and narratives. How the heck can any person call Obama and his policies in trouble when he has approval ratings over 50% in 48 of the 50 states? And an Obama 63% approval rate across the entire country?

6 months in we are talking uber popular, both in Obama's leadership and in many of his policies. If anything, the numbers inside the polls, overall and IMHO, show that the solutions they are seeing are not liberal enough for them.
And we can thank the raging, lying loonies on the right wing for helping to solidify those numbers.

While I am certain that many of the people with more experience in reading into polls will have more important things to say about it all, people like the number crunchers at dKos or Nate Silver at fivethirtyeight.com, but really, and let us be honest here: If a picture is worth a thousand words, that one up there speaks volumes.