The hose stretches from drilling waste, downhill to the creek 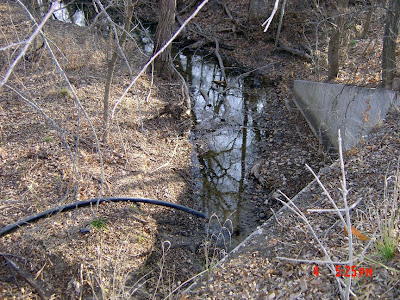 With great interest I’ve watched the drilling going on around me hoping that all would go well and the producer would take care and follow the rules, such as they are. For weeks, I noticed the black hose that meanders along the side of FM 730. It winds through culverts and under bridges to continue along the other side—so it appeared. Sunday, something told me to pull over and look under the bridge. The hose does not continue under the bridge to the other side as it appears. It ends in the creek that is part of the watershed for DFW.

Here is where the hose starts. That’s a sludge pit filled with drilling waste.

It comes out of the sludge pit and snakes through a culvert to the other side of the road. 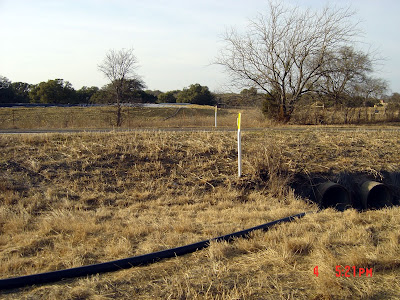 Then it continues down a fairly steep hill and into the creek. 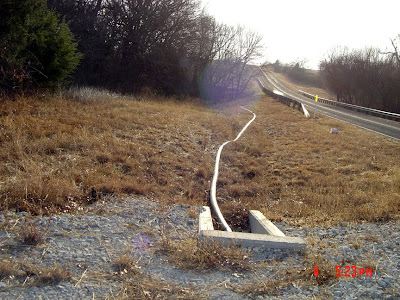 I don’t know what’s going on here, but this doesn’t look good and I think someone needs to check it out. Have you ever seen what’s in drilling waste? It’s not something I want to drink and I certainly don’t want my children drinking it!

Who’s on first, or Monty Python?

I called the Wise County Sheriff’s office and the dispatcher agreed to send a unit out to meet me. After waiting about an hour, I called back and was told that the sheriff came out and didn’t find anything. Huh? I was sitting right by the bridge and, no, he never came. I had to repeat myself several times and make it clear that I would not be put off. I insisted that someone come so the dispatcher reluctantly agreed to send the volunteer fire department.

About 30 minutes later a fire truck with lights flashing roared past us. By this time my son was cracking jokes and doing his best Cartman imitation. He said we should give up, but I waited until the truck drove back by, and when I flashed my headlights, they stopped.

Silly me! I was worrying needlessly as the fireman assured me. He had gone straight to the drilling site himself to inquire about the hose. The operator at the site told him it was no big deal, nothing to worry about, nothing to see here, move along.

By then it was dark so I gave up and went home.

Then next day we were covered in a blanket of ice so I couldn’t go anywhere.

Today, I see that the hose is still there, and, when I drive by the pit, it sure looks like that reddish brown stuff floating on top is drilling waste.

I climbed a tree on the side of the road to get a better look. Clearly, that reddish brown stuff is drilling waste! 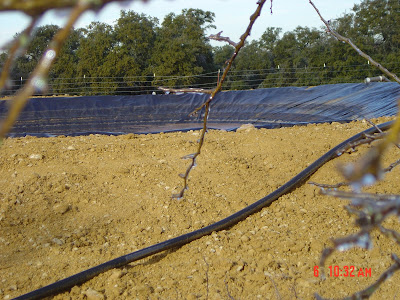 The sludge pit was much fuller just over a week ago as you can see from the next picture. Where the heck has all that drilling waste gone? 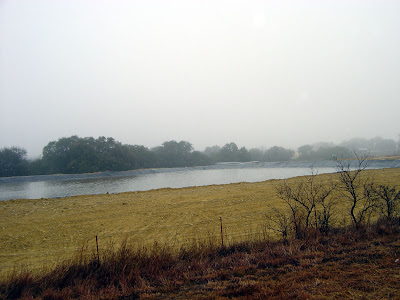 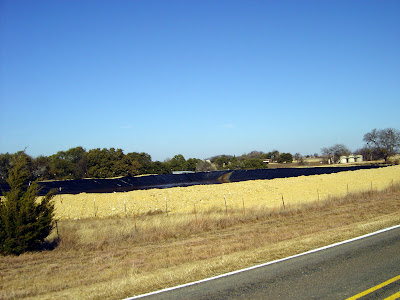 You might remember the site where the drilling company dumped their sewage in the sludge pit? Yeah, Braden was also the operator on that site. I knew, when I reported them to the Texas Railroad Commission, they had pooled my land in the well they are currently drilling and that I would need to negotiate with them. Braden could have apologized and vowed to never let that happen again. (Actually, why should Braden apologize? When I reported it to the TRC, District 8 Manager, Walter Gwyn said that since his inspector did not see any toilet paper floating in the pit, the onsite sewage container couldn’t have been dumped into the pit. There is no need to apologize or follow any rules when the oversight authority consistently provides cover for your wrongdoing.) Instead, Braden, through my lawyer—who is clueless about who I am in my real life and therefore was confused by Braden’s response—sent me the most ridiculous lease imaginable! They refused to allow me any information and removed many clauses that are standard. This all left me with a question: What are they trying to hide?

Braden just completed two wells near me. Each of these well sites has a sludge pit, but apparently one pit is not enough to contain all the sludge hence the huge pit in the pictures. I find it curious that the huge pit is lined while the other Braden pits are unlined. Why? The only reason I can see is that huge pit is clearly visible from the road. If you can't see pollution in the forest is it really there?

Per state regulations, sludge pits must be “cleaned up” 120 days after the well is completed. This huge pit has remained for about five years. Just recently, it was made bigger and lined by Braden.

Here is a picture of the small pit directly across FM 730 from the huge pit. 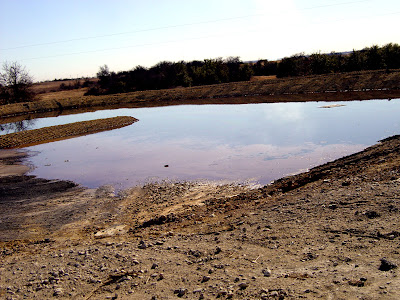 EDIT: Adding 2 additional pictures
Initially I thought the reddish stuff around the edge was a shadow, but upon closer inspection I saw that it's drilling waste. 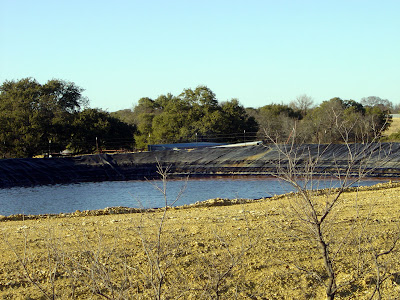 Close up of hose in creek 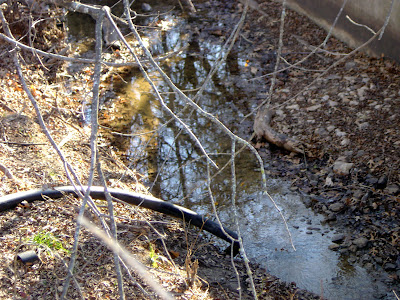 Not a great response from the local authorities

Marcellus Shale people!  Are you watching this?

Just a thought....if you keep the pics coming to the newspaper they may just do a story.

BTW, did you see that the Trans-Texas Corridor plans dropped after public outcry

Maybe only the name has been changed?

From the article you linked to:

The state will move forward with a series of individual projects that had been considered part of the Trans-Texas Corridor plan, he said.

This IS still TX and it IS still controlled by Republicans.

Can you tell if the hose is dumping

or could it be drawing water? Just curious if you can tell?

Also, I wonder if it would be useful to get water samples and from the creek there, and maybe some of the sludge from the different pits you are worried about? I am no expert but it would seem to me it might be useful.

that the hose is drawing water because it would take a pretty big pump to get it up the fairly steep hill to the pit. Also, the creek doesn't have that much water in it.

I could have gotten some water samples but probably not without falling in the creek. The bank is pretty steep and slippery. The problems with getting samples are: